LAWRENCE — A University of Kansas School of Engineering program that seeks to retain engineering students by helping them improve on math, physics and chemistry exams has received national recognition. The School of Engineering Practice Exam Program has been honored with a gold Excellence Award from the National Association of Student Personnel Administrators. NASPA made the announcement in January. 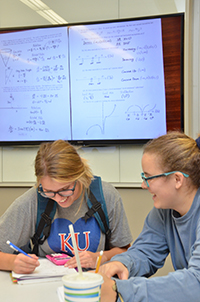 Dawn Shew, director of undergraduate academic services for the School of Engineering, said the practice exam program is designed to encourage new engineering students who may be tempted to change majors after experiencing the rigors of college-level math. The program was first offered at KU in spring 2017.

"Math is the No. 1 reason students don't progress in engineering. Often, they've done well in math in high school, then come in and take math at KU and don't excel the way they're used to,” Shew said. "Our feeling was if we could change their performance in math, they wouldn't talk themselves out of engineering so quickly."

Here’s how the program works: Practice exams are held on the Sunday night before a major exam, usually between 7-9 p.m. All students who are taking the exam — not just engineering students — are welcome to participate.

During the first half-hour, students work on a practice exam — modeled after the actual exam they’ll take — on their own, sitting quietly with dozens of other students in an atmosphere designed to duplicate real testing conditions. Those simulations, of both the problems and the testing environment, are important parts of the program.

"When we talked with students, they shared that they thought they knew the material but then would blank with the stress of taking an exam in a room of 300 students,” Shew said. “The idea became to do this like athletes, to practice how you perform. When you do it at home on your couch, it's very different from the actual test. The practice environment aims to duplicate the test environment as much as possible."

Shew added: “It helps get those jitters out.” 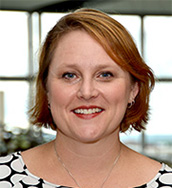 After the initial half-hour is over, students get together in groups during the next 30 minutes to work on the problems together, learning from each other as they proceed. That’s followed by a second hour when older engineering students — from student organizations like the Society of Women Engineers, the Association for Computing Machinery, the American Institute of Chemical Engineers and more — come in to take questions and help the younger students better understand the concepts they’ll use during the real exam.

Attendance at practice exams is voluntary: Shew said the first practices were attended by roughly 15 to 20 percent of the students who would eventually take the real exam. Now that proportion has increased to half. “It’s not unusual to have up to 170 students come to those practice exams,” Shew said.

The program has also reduced the rate of students who get a D grade or lower on the exam, or withdraw, she said. For Calculus 1 students, that rate was around 35 percent in the past. This fall, only 7 percent of the students who participated in Calculus I practice exams earned a grade of D or F, or withdrew from the class.

"I think the program's a good way to study, especially when you're first coming in,” Gardner said. “It's good, because you might not know how to study yet, or understand how every exam is different because of the professor."

Gardner added: “The practice exams let you break it down and narrow your focus: ‘I'm good at these problems, but not at these problems,’” she said. “It helps you know what your weaknesses are so that you can make them strengths."

For Gardner, at least, the practice exam program is meeting its goal of helping engineering students stay in the program instead of shifting majors.

“I definitely think it helped put me on the right track to staying in engineering,” she said.

The NASPA honor isn’t the only recognition for the practice exam program. It was highlighted during the School of Engineering’s recent accreditation process with the Accreditation Board for Engineering and Technology, Shew said, and KU officials have been invited to make a presentation to the American Society for Engineering Education.

There’s a reason the program has earned that attention, Shew said. "I'm not aware of anyone else who is doing it."

More important than the honors, she said, is the effort to help young engineering students stay on track.

“We have an obligation to help students who want to be engineers to succeed,” she said. “In my opinion, we need to do everything we can do to help them achieve that."