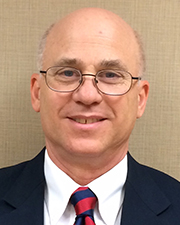 He is the last of four candidates for the position who will make public presentations during their respective campus visits. His presentation will be from 10 a.m. to 11 a.m. in the Lied Center Pavilion. A half-hour reception will follow.

Hichwa has been affiliated with the University of Iowa since 1988, serving first as the director of the positron emission tomography imaging center at the University of Iowa Hospitals and Clinics and as associate professor of radiology at IU’s College of Medicine. In 1997 he also was appointed adjunct associate professor of physics at IU’s College of Liberal Arts and Sciences. In 2003 he was promoted to professor of radiology in the College of Medicine with joint appointments as adjunct professor in the Department of Physics and Astronomy and the Department of Radiation Oncology. In 2003 he was selected to be vice chair for research in the Department of Radiology. From 2006 to 2010, Hichwa served as associate vice president for research for the university. He was named University of Iowa’s senior associate vice president for research and economic development in 2010. In addition to continuing in this role, he held interim positions for associate vice president for research compliance from 2015-2016 and interim director of the UI Research Foundation in 2017.

Prior to his tenure at Iowa, from 1983 to 1988, he was director of the cyclotron/positron emission tomography facility at the University of Michigan Medical School. He was an assistant professor of bioengineering at University of Michigan during this time. From 1985 to 1988 he also was assistant professor of internal medicine at the School of Medicine. He has been a visiting professor or visiting research professor at several institutions, including Creighton University, Drake University, Ion Beam Applications S.A. in Belgium, and Control Technology Inc. in Knoxville, Tennessee. In 1993, Hichwa was an Asia Luminary scholar and visiting professor, which took him to medical facilities in Seoul, Taipei, Beijing, Shanghai and more. During his scholarly career, Hichwa has been very involved in a variety of departmental, college, university, state and national committees and councils.

His research interests focus on use of positron emission tomography in investigation of human cellular and system function, development of scientific visualization methodologies to analyze image-based data, design of radiation detector systems, as well as development of institutional programs focused on responsible research conduct. He has co-authored several book chapters, and his scholarly work has been published in IEEE, Brain, the Journal of Nuclear Medicine, Neuroimage and more. He has served on several National Institutes of Health grant review panels as well as review panels for the National Cancer Institute, the Department of Energy, the Whitaker Foundation, the University of Iowa and other international councils.

Hichwa earned a doctorate in medical physics from the University of Wisconsin-Madison. He has a master’s degree in radiological sciences from Wisconsin and a bachelor’s degree in physics from the University of Notre Dame. Between his bachelor’s and master’s programs he studied nuclear physics at Vanderbilt University in conjunction with a research assistant position at Oak Ridge National Laboratory. He has held membership in several professional societies and organizations, including the American Physical Society, the Society of Nuclear Medicine, the Institute of Electrical and Electronics Engineers, the Academy of Molecular Imaging, the Association of University Radiologists and more.

The vice chancellor for research search committee — led by Distinguished Professor of Chemistry Kristin Bowman-James — invites students, faculty and staff to attend the presentations and provide feedback of their impressions. Each candidate prepared a presentation on the topic “Vision and Strategies for the Evolution of the Research Enterprise at KU.”

Candidate presentations will be recorded and available for viewing online after the final candidate has appeared on campus. Evaluations of all candidates are due by 4:30 p.m. Monday, Oct. 8.