LAWRENCE — The University of Kansas Department of Curriculum & Teaching will host the premiere of “Unrest,” a documentary film featuring Jennifer Brea and her journey for advocacy and awareness of chronic fatigue syndrome. The film documents her struggle to 1) be believed and diagnosed by doctors 2) to live a productive life in community with her partner and other sufferers, and 3) and to bring together the community and engage in health activism from her bed via digital media, social media and Skype.

“Unrest” premiered worldwide in January 2017 in the documentary competition at the 2017 Sundance Film Festival, where it won a Special Jury Prize for editing.

The screening will take place at 6 p.m. Dec. 1 in Woodruff Auditorium of the Kansas Union. The event is free and open to the public.

“A good number of educators and students suffer silently with various chronic illnesses, and this film speaks to these individuals. Yet the film also shows one person’s attempt to strongly advocate for their health,” said M’Balia Thomas, assistant professor of curriculum & teaching. “In this contentious time of ‘taking a knee,’ there are faculty, staff and students who struggle with how to advocate for self and others and how to teach their students to do so. This film does a beautiful job in showing the power of technology in educating the public and engaging in social advocacy.”

Brea was an active doctoral student at Harvard University who was about to marry the love of her life when suddenly her body began failing her. Hoping to shed light on her strange symptoms, Brea grabbed a camera and filmed the darkest moments unfolding before her eyes as she was derailed by myalgic encephalomyelitis (ME), commonly known as chronic fatigue syndrome (CFS), a mysterious illness some still believe is “all in your head.” 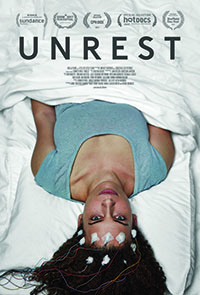 ME/CFS is a devastating multisystem disease that causes dysfunction of the neurological, immune, endocrine and energy metabolism systems. It often follows an infection and leaves 75 percent of those affected unable to work and 25 percent homebound and bedridden. An estimated 15-30 million people worldwide have ME/CFS.

The Department of Curriculum & Teaching is housed in the School of Education, a nationally ranked school preparing educators and health/sport/exercise professionals as leaders.