LAWRENCE — A section of Antarctica now bears the name of a University of Kansas professor and alumnus.

The U.S. Board on Geographic Names announced it has registered the “Gogineni Subglacial Trench,” which acknowledges the contributions of School of Engineering Distinguished Professor Prasad Gogineni. The subglacial trench sits in proximity to landmarks with highly recognized names such as the Darwin Mountains and the Queen Elizabeth Mountain Range.

Gogineni leads the NSF Center for Remote Sensing of Ice Sheets, headquartered at KU. The center develops new technologies, such as ice-penetrating radars, and computer models to measure and predict the response of sea level change to the mass balance of ice sheets in Greenland and Antarctica. Gogineni and his research team identified the characteristics of the trench, hidden by ice approximately 3 kilometers thick, that now bears his name.

“Dr. Gogineni is a truly distinguished researcher who has advanced the boundaries of human knowledge,” Chancellor Bernadette Gray-Little said. “One of KU’s missions is to make discoveries that change the world, and Professor Gogineni has been key to advancing that mission. His work is providing new insights in fields vital to understanding our planet, so it is a unique and fitting honor that his achievements will be recognized in this way.”

Gogineni earned his doctorate in electrical engineering from KU in 1984 and after working as a research engineer at KU was hired as a professor in the Department of Electrical Engineering and Computer Science in 1986. He said he has been involved in research that develops radars and remote-sensing tools to measure various conditions of polar ice since his student days. 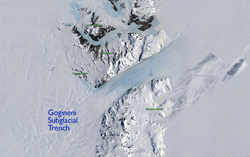 “This recognition of Professor Gogineni’s accomplishments is particularly well-deserved,” said Joe Heppert, associate vice chancellor for the KU Office of Research. “Data on ice sheet dynamics collected by the KU Center for Remote Sensing of Ice Sheets research team, which Dr. Gogineni leads, has been instrumental in re-writing our understanding of our polar regions. His years of hard work and innovative research are worthy of a tribute of this magnitude.”

This isn’t the first major honor for Gogineni, who received NASA’s Terra Award in 1998 for exceptional scientific and technical service to the agency and KU’s Louise Byrd Graduate Educator Award in 2002. Later that year, he spent several months in Tasmania on loan as a Fulbright Senior Scholar.

“All of us in the School of Engineering are so proud to hear about this new accolade,” said Dean of Engineering Michael Branicky. “Dr. Gogineni’s legacy isn’t just that his pioneering research has changed what people know about polar ice, but that he’s also led so many KU students to new levels of achievement. As both a KU faculty member and a School of Engineering alumnus, he’s a great example of the excellence KU shares with the world.”

One of the students he advised, Carl Leuschen, now teaches as an associate professor in the EECS department and works closely with Gogineni as deputy director at CReSIS.

“One thing I remember was his willingness to spend long nights in the laboratory to get projects working correctly, whether it be a radar system or a computer simulation,” Leuschen said. “Prasad has been instrumental in advancing radar technology and optimizing systems for remote sensing of ice sheets. His dedication to his work, students and colleagues has enabled us to sound and detect this trench. I am very pleased with him being honored by having the trench named after him as he has made significant contributions to his field.”

CReSIS, which was established in 2005, has made great strides in research and fieldwork concerning changes in ice sheets and their effect on sea level rise. Data collected by the center were instrumental in developing a new highly detailed map of the bedrock of Antarctica. CReSIS data were also instrumental in identifying a mega-canyon buried under miles of ice in Greenland. Portions of the canyon are twice as deep at the Grand Canyon.

The KU Center for Remote Sensing of Ice Sheets (CReSIS)

Visit the US Board on Geographic Names's Antarctica Query Form and type: Gogineni Subglacial Trench.