LAWRENCE – The second candidate for the University of Kansas Office of Diversity, Equity, Inclusion & Belonging (DEIB) vice provost position will give her public presentation from 2:30 p.m. to 3:30 p.m. Friday, Sept. 23, in the Kansas Union Woodruff Auditorium.

The presentation will be livestreamed, and the passcode is 551402. 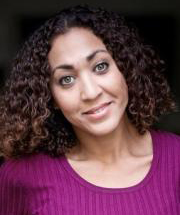 Nicole Hodges Persley, interim vice provost for diversity, equity, inclusion and belonging, is the second of four candidates who will present her philosophy on the role diversity and inclusion play in higher education in the United States and how her philosophy would advance Realizing Intersectional Standards of Excellence (RISE) on KU’s Lawrence and Edwards campuses and further KU’s mission considering current challenges and trends in higher education.

She is an award-winning KU professor, artist and community leader with over 15 years of experience in diversity, equity and inclusion work, where she has created intentional equity pathways between academic and creative communities.

Faculty, staff and students are encouraged to offer their impressions and observations of each candidate online. There will be separate surveys for each of the four candidates where members of the KU community will have the chance to share their opinion of each candidate. Feedback on Hodges Persley’s presentation is due by 5 p.m. Tuesday, Sept. 27, and a recording of her presentation will be available here until the survey closes.

Each candidate will meet with Barbara A. Bichelmeyer, provost and executive vice chancellor, as well as campuswide DEIB leaders and DEIB office staff, vice provosts, deans, KU Athletics, faculty-staff affinity groups, university governance and a representative from the chancellor’s office during their campus visit.

In addition to her work in DEIB, Hodges Persley has served in several areas of KU administration from department chair to director of museum studies. She is an associate professor in the departments of American Studies and African & African-American Studies and a faculty fellow in the University Honors Program, where she teaches courses on acting, directing, hip-hop studies, African American studies, performance studies and transnational performance. She has written five books, including a forthcoming book, “Hip-Hop in Musical Theater,” set to publish in 2023.

Hodges Persley is a working professional director who specializes in works that explore race and performance in American theater. She has directed critically acclaimed theater and performance works throughout Kansas City, New York and Los Angeles and is a member of the Screen Actors Guild - American Federation of Television and Radio Artists (SAG-AFTRA) as well as the Stage Director and Choreographers Society. She has been invited to share her creative and scholarly work internationally at universities as a visiting scholar.

Hodges Persley is the artistic director of KC Melting Pot Theatre, an African American theater company in Kansas City, and the co-founder of CreateEnsemble.com, the first social media collaboration platform for artists and allies of the global majority. She received her bachelor’s degree in French and art history from Spelman College, a master’s degree in American studies from the University of Southern California, a master’s degree in African American studies from the University of California-Los Angeles and a doctorate from USC’s Department of American Studies & Ethnicity.

Two more candidates are scheduled to present in the weeks ahead.

More information about the search is available online.