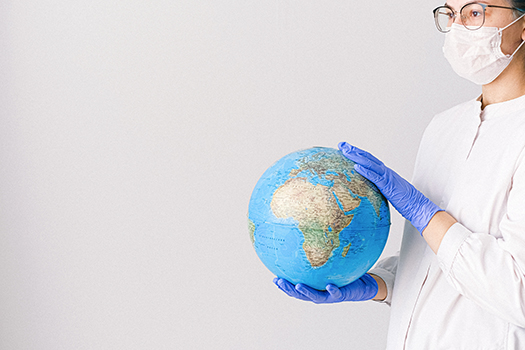 LAWRENCE — When the COVID-19 pandemic swept the globe, many people turned to online sources to find health information. That was also largely the case for racial and ethnic minority populations in the United States, and a new study from the University of Kansas found they faced many of the same challenges such as encountering misinformation online, but also unique factors such as harassment, hostility and racial animus. They also relied on media from the United States and their home countries, as well as social media for information, but were hesitant to push back against misinformation.

Mass communications researchers at KU conducted in-depth interviews in early 2021 with 49 racial/ethnic minority individuals in the Midwest who migrated to the United States since 2014 about their COVID-19 online information experiences. In addition to the findings about where and how they received information, the study also found younger and healthier people showed more resistance to being vaccinated. The findings can help scholars, digital media and health communicators develop more effective health messaging and minority communication, the researchers wrote.

The United States is home to more immigrants than any other country and was simultaneously hit hard by the pandemic. Those factors led researchers to examine how racial/ethnic minorities and immigrants navigated the pandemic and found information. Notably, most interviewees reported turning to online media from the U.S. and their country-of-origin to find information. While that information could prove helpful, it also provided an avenue for misinformation and harassment that was rampant on social media.

“We found that many of our interviewees rely on the news and social media, including Facebook and YouTube, to find health information during the pandemic. Noticeably, many participants use media sources from their country-of-origin as well as U.S. based sources. However, while these platforms allowed them to receive social support and find the necessary information about COVID-19 protections and other information, at times these networks created more stress and fear amongst the participants,” Baines said. “For instance, several interviewees described looking at and receiving hateful messages and racial slurs online, particularly among those immigrants from Asian countries. Unfortunately, these findings are not that surprising as people who migrated from Asian countries have faced xenophobia related to COVID-19 on social media since early 2020 when prominent individuals called it the ‘Chinese virus.’”

That added stress was illustrated by one interviewee, a 56-year-old woman who emigrated from South Korea.

‘I saw hateful comments toward Asian immigrants, some posts more specific to people from China, on Facebook calling them ‘spreaders of coronavirus’ while using F-words,” she said. “These experiences got me really stressed and nervous, so I didn’t want to visit even social media sites for a while.”

In addition to a hostile online environment, roughly two-thirds of participants also encountered misinformation, largely on social media such as Facebook and WhatsApp, and reported seeing it both coming from the U.S. and their countries of origin. However, they also largely reported treading carefully when deciding whether to correct or address the misinformation. They commonly wanted to consider cultural norms in both countries and expressed uncertainty in political beliefs of the person sharing the misinformation. But, when it was coming from family members or close friends, they were more likely to correct or push back against incorrect information.

Researchers also asked interviewees about their willingness to receive a COVID-19 vaccine. When asked in early 2021, as vaccines were beginning to become widely available to the public, about one-fifth said they would not get vaccinated, or at least “not for now.” The majority of those respondents were young and healthy, and they reported both a lower perceived risk or susceptibility to the virus and lower perceived benefit of a vaccine, as opposed to those who said they intended to get the shot.

As racial/ethnic minorities and immigrants constitute a substantial part of the American population, better understanding how they obtain health information, especially during a pandemic and how that information affects vaccine willingness, can assist both researchers and those working in the health field, the research team wrote. For scholars, the study both provided new and needed empirical data on minority immigrants in terms of health beliefs and shed more light on the Health Belief Model, a theoretical framework commonly used in health research.

The findings can also help ensure accurate information is readily available for those seeking information on health-related topics such as the pandemic and how to address specific challenges such as harassment or reluctance to push back against misinformation.

“The findings from this study highlight the importance and urgency for media organizations, health care providers, policymakers and government entities to take measures to create better information environments related to COVID-19 on social media,” Baines said. “We found that two-thirds of our sample was exposed in some way to misinformation online. It is essential for relevant organizations to identify and eliminate misinformation online and provide an information hub tailored for specific populations so that any needs of underserved immigrant populations can be addressed.”