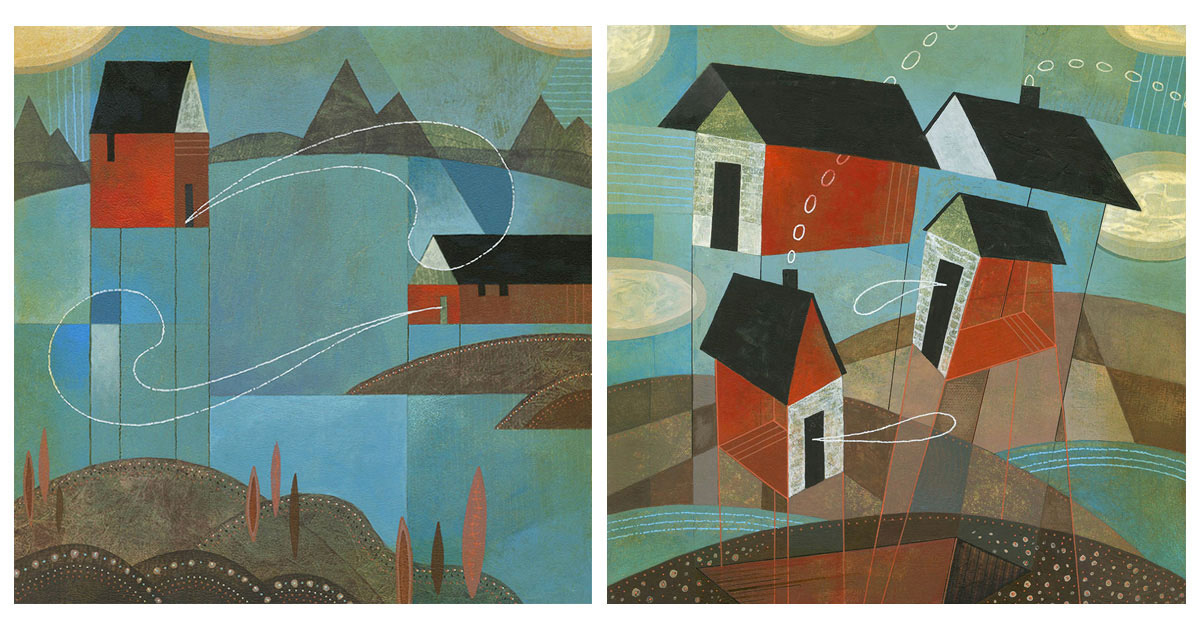 LAWRENCE — Barry Fitzgerald, who is closing in on 30 years as a professor of illustration and animation in the University of Kansas School of Architecture & Design, counsels patience to students eager to make their mark in Hollywood or any other high-level artistic endeavor.

Lately, he’s been modeling it, too.

This spring, he hit a long-sought trifecta of sorts.

Inspired by efforts to communicate despite the COVID-19 lockdowns of 2020, he created a group of paintings titled “Interrupted” that he showed in January at the 30 South Gallery in Pasadena, California.

That began a sort of log-rolling process.

Some of the paintings were chosen by jurors for inclusion in Communication Arts magazine’s special edition, Illustration Annual 63. Works by the winners were featured in the May/June edition of CA, as it’s known.

Shortly thereafter, Fitzgerald learned some of the same works had also been chosen for inclusion in the forthcoming American Illustration 41, another collection of the year’s best work in the field.

And finally, the work will be included in 3X3 magazine’s Annual No. 19. The magazine will publish an online gallery of the winners’ work this fall and a physical companion piece in December.

While he called them “some of the big guns of illustration competitions,” Fitzgerald said he was particularly pleased to be included in CA 63. “I've been chasing it my whole career, and finally I can check that box,” he said.

A couple of the pieces from the same group of affecting works are up now through July 29 in the main gallery at Studios Inc. in Kansas City, Missouri. The show’s opening was timed to coincide with the June 29-July 1 ICON11 Illustration Conference held in Kansas City.

With the benefit of his long tenure, which includes reviewing program applications from high school students, Fitzgerald said he can see that interest in illustration remains strong.

“I think it's just the increased amount of and access to visuals that are not photo-based,” Fitzgerald said. “You’ve got video games; you've got animation in every way, shape and form. When I was a kid, cartoons were limited to Saturday mornings, and now there are networks dedicated to cartoons, and other networks dedicated to cartoons for adults.

“And so there's just more demand, and I think it's because there's more influence.”

Fitzgerald likes to work in a variety of media, including acrylic paints and colored pens and pencils, often within the same illustration, as in “Interrupted.” He said he concentrates on teaching technique, and style (“the S word,” he said) will follow.

“Don't worry about it,” he said. “It'll take care of itself. You almost can't stop it from coming out, because you're the one that's making it.”

Keep working away at your craft, Fitzgerald said he tells students, even if you don’t get your dream job at Pixar straight out of school.

“I always tell students to shoot for the stars, you know? Go big! But if you don't get it — and the reality is, there's a pretty good chance you won't — that doesn't mean you should give up on that dream. It just means you’ve got to keep trying and then make the most of the opportunities that cross your path as you're working toward a goal.”