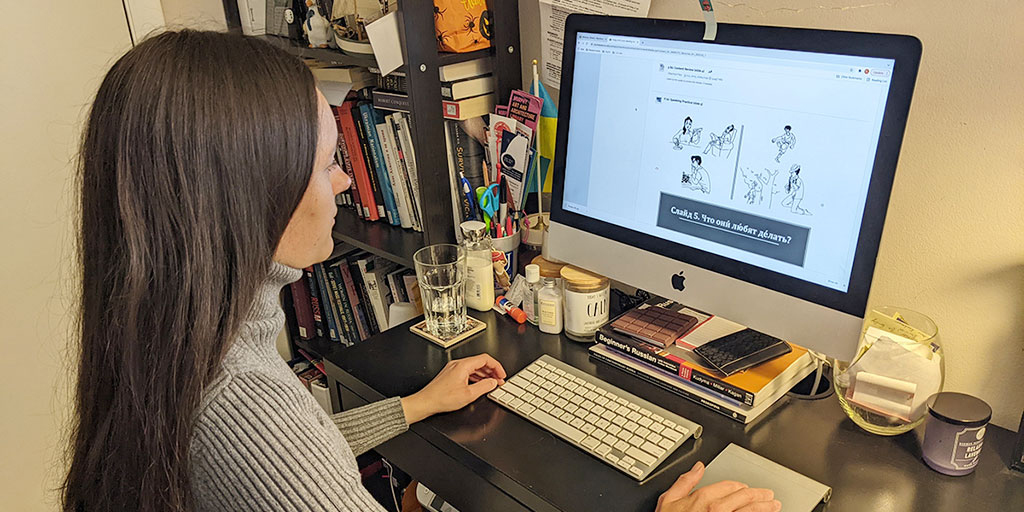 LAWRENCE – Irina Six and Olga Garabrandt took the lemons doled out in 2020 by COVID-19 and turned them into the lemonade of an effective and entirely online class for first-year Russian language students that combines five days a week of individually directed work with a single group session.

This combination of synchronous (simultaneous) and asynchronous work is termed “bichronous” in a new paper co-written by Six, assistant teaching professor, and Olga Garabrandt, graduate teaching assistant, in the University of Kansas Department of Slavic and Eurasian Languages & Literatures.

The authors wrote that, even before pandemic lockdowns began in March 2020, KU’s Russian faculty had considered creating an online beginner course. Over the summer of 2020, then, they and their colleagues were forced to build a new, all-online course format. They were able to do so upon the foundation of an open-source digital textbook titled “Mezhdu Nami” (“Between Us”) pioneered at KU in 2009.

“The idea was there for a long time that languages should be taught online or asynchronously,” Six said. “But before I thought it was not possible for the first and second year. I thought it's OK for students who already know the language, but it will be hard for those who don't know anything. And, actually, the results were better than I thought they would be.”

The authors wrote that they came up with a format of four days a week, Monday through Thursday, of online instruction that the students could complete when and wherever they liked, combined with a Friday session where everyone worked together at the same time on their conversational skills, capped off by a “Russian weekend” of fun, online interactions designed to instill Russian culture.

“We designed the course considering how to make them work in the language in an online environment, how to make them respond, how to create this environmental context around them, even without anyone else around. That was the hardest thing. That was where we used to stop because, you know, how can we artificially do that?”

The answer, according to the authors, was to create a series of exercises for asynchronous days that required the students to listen, speak and interact in Russian online.

“The most important thing we decided they should do every day – to enforce a certain discipline – was to record themselves speaking Russian at the end of the day. All their assignments are preparing them for their oral recording every day,” Six said.

Each weekday lesson began with a brief recording of the teacher outlining the day’s work. Regular assignments included reading, speaking interactively with voices in the digital textbook and multiple-choice (and multiple-chance) testing. The Friday synchronous sessions included breakout rooms for students to talk and help each other in pairs at times while the teacher circulated around the rooms.

The authors wrote: “In fall 2020, the number of KU students who enrolled in the Beginner Russian course and completed it without failure or withdrawal was higher in the online bichronous course (15 students) than in the hybrid (10 students) or fully face-to-face class (10 students). Students in all classes used the same textbook, and their results on the final exams were similar ... This is consistent with studies that reveal no significant differences in learning outcomes in traditional and e-learning modes of delivery.” Moreover, they wrote, the all-online students completed their work in slightly less time, “suggesting that the bichronous course might be less stressful and more manageable to students.”

Six and Garabrandt wrote that “the specific principles and practices described in this article are yet to be confirmed with more precise data. Nevertheless, some preliminary observations of student performance ... look promising and beneficial for both students and departments.”

Six sees the format as perfect for distance learners. She can imagine forming a class of high school seniors from across Kansas in this way. Next up, though, she said, is adapting the format for second-year college students.