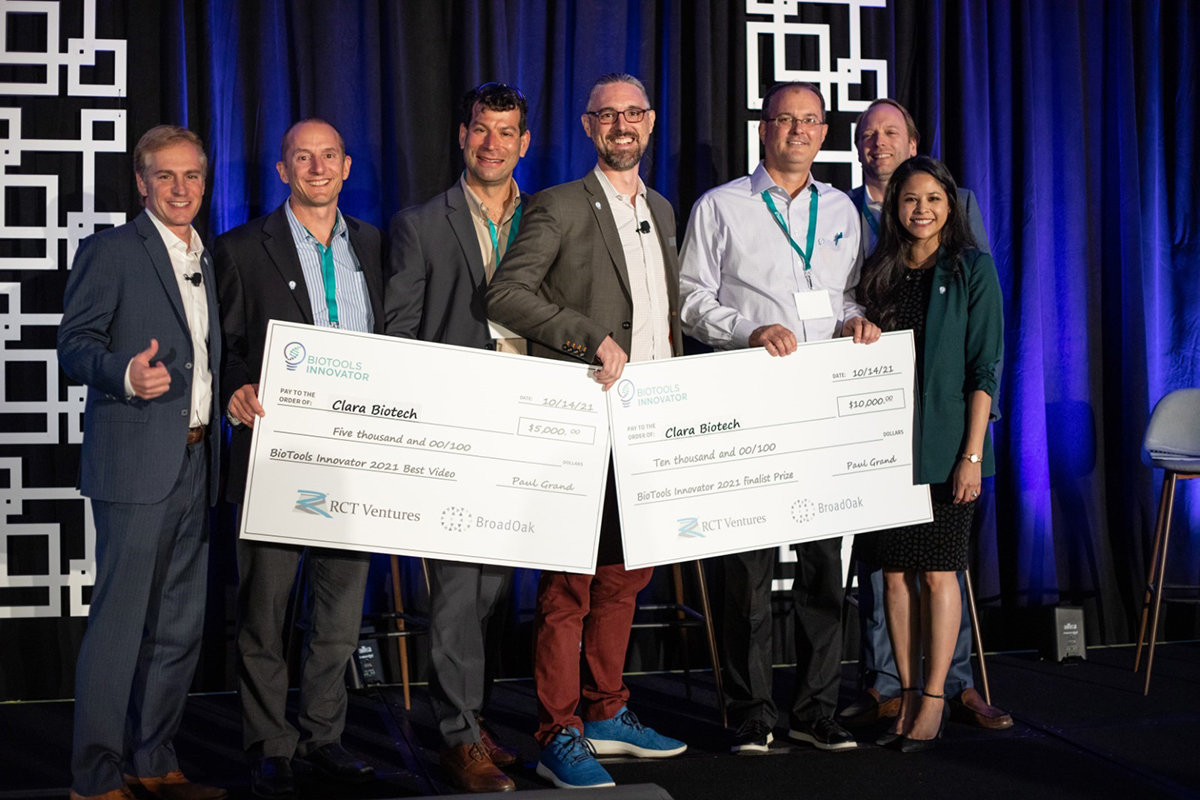 LAWRENCE — The human body contains trillions of cells at any given moment, each doing highly specialized work to help us function — but they don’t operate in isolation. Imagine a sophisticated FedEx or UPS delivery network empowering communication between our cells. The nano-sized delivery vehicles in this scenario are called exosomes, and a company born from technology developed at the University of Kansas is harnessing the power of these tiny vessels to enable tomorrow’s medical breakthroughs.

Clara Biotech, founded by KU engineering alumnus Jim West and former KU professor of chemical & petroleum engineering and chemistry Mei He, has spent the last three years refining a novel technology to isolate and purify exosomes, which can be used for early disease diagnosis, targeted drug delivery, cancer immunotherapy and other forms of regenerative medicine.

Now, the company is poised to commercialize its first product after recently finalizing $1.5 million in seed funding and being recognized in a national competition. Clara Biotech was the only Midwest company singled out in MedTech Innovator’s Biotools Innovator program, which recognizes the 10 best life science tools startups. The company received $10,000 for securing a spot in the 2021 cohort and a $5,000 best-video award for a one-minute spot introducing the company and detailing what sets it apart.

“Clara Biotech was founded to help move exosomes from the bench to the bedside,” said West, who serves as Clara’s CEO. “Our company is about building a platform that everybody can leverage to bring their products to market and help solve challenges around isolation and purification, which today is one of the number one issues in the field.”

Exosomes deliver genetic information to cells throughout the body. Exosomes from regenerative cells, such as stem cells, can help the body heal and repair itself. Exosomes released from diseased cells might be used for early detection and diagnosis of cancer and other conditions.

But at 100 nanometers in diameter — less than the wavelength of visible light — exosomes are difficult to handle.

Clara Biotech’s patented ExoRelease platform is unique in the industry. Current processes rely on bulk isolation, whereas Clara’s “capture and release” technology isolates pure exosomes. This allows researchers to easily isolate and target specific exosomes — including cardiac, neurological, cancer and others — and use them for therapeutic treatments and drug delivery platforms.

“I’m very excited about the work that Clara Biotech is doing to improve exosome purification,” said Kathryn Zavala, managing director of BioTools Innovator. “Their technology has the potential to significantly impact how we diagnose and treat diseases by advancing the field of exosome research and development.”

Clara Biotech launched in 2018 with a Small Business Innovation Research grant from the National Cancer Institute and received training through the National Science Foundation’s Innovation Corps (I-Corps) program on how to transfer knowledge into products and processes that benefit society. It has seven full-time employees, and its lab is housed in the KU Innovation Park.

“Clara Biotech is an example of how KU innovation provides the foundation to form a company that addresses societal needs and creates Kansas jobs,” said Tricia Bergman, KU’s director of strategic partnerships. “It also illustrates how technology developed in KU labs can transition into the KU Innovation Park, where the company can continue to develop through ongoing partnerships with the university.”

Until now, Clara Biotech has provided lab services to its customers. Now, it’s moving toward packaging its technology so other companies, labs and researchers can leverage it to complete the isolation process themselves.

“We’re trying to democratize access to these exosomes,” West said.

Clara Biotech is beta-testing kits containing its isolation technology — with promising results from early adopters — and hopes to launch its first product by the end of the year.

“Building a company is probably the hardest thing I’ve ever done in my life, but it’s also super rewarding,” West said. “The work we’re doing is really important.”