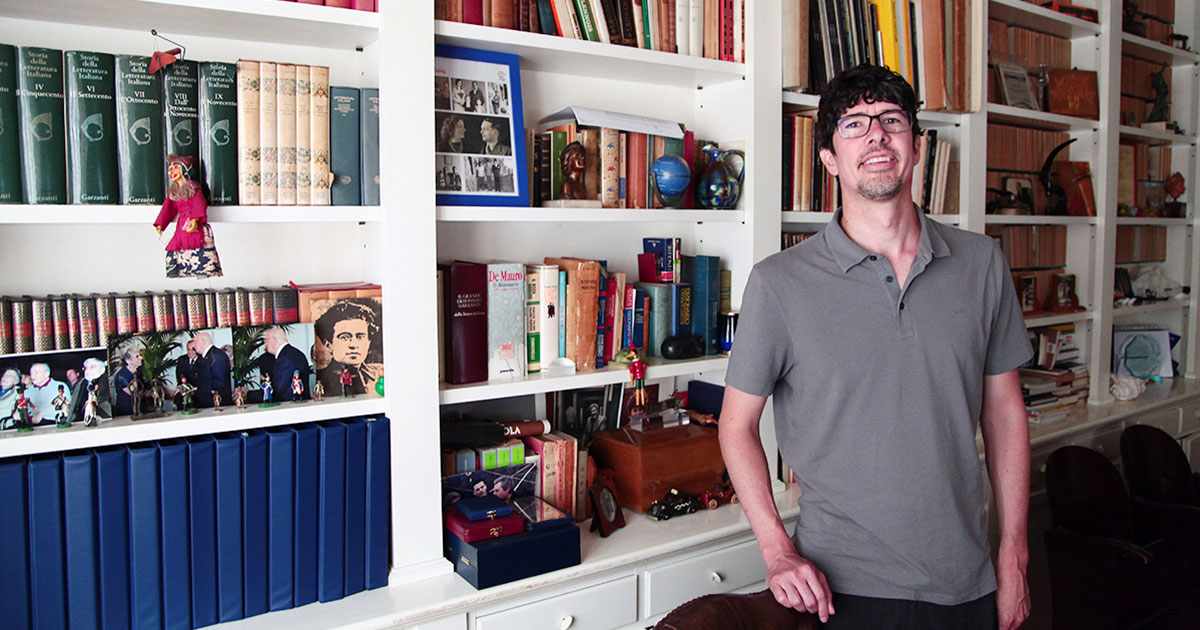 LAWRENCE – Five years after the death of renowned screenwriter and filmmaker Ettore Scola, a scholar of Italian culture at the University of Kansas is contributing to a renewal of interest in Scola’s cinematic career.

Edward Bowen, assistant teaching professor of Italian at KU, has contributed an article on the critical reception of Scola’s films in the United States during the prime of the filmmaker's career (1970-87) to a special edition of Italy’s oldest film journal, Bianco e Nero, or Black & White. Bowen’s article, written in Italian, is in a section of the issue dedicated to the reception of Scola abroad. This publication follows the first English-language book dedicated to the screenwriter and director, “The Cinema of Ettore Scola,” (Wayne State University Press, 2020) which Bowen co-edited with Wake Forest University professor Rémi Lanzoni.

“Scola had an illustrious career,” Bowen said. “He made 27 feature films as a director in addition to short films, documentaries and episodes in anthology films. He's best known for his films about Italian and French history as well as his contributions to Comedy Italian Style — satirical and grotesque comedies of the ’60s and ’70s that offer biting commentaries on the challenges of adapting to rapid changes in Italian society.”

Scola was nominated four times for an Academy Award for Best Foreign Language Film, and he won the Best Director award in 1976 at Cannes for “Brutti, sporchi e cattivi” (“Ugly, Dirty & Bad”). Before he first sat in the director’s chair in 1964, Scola wrote dozens of comedic screenplays, including several masterpieces of Comedy Italian Style, Bowen said.

“In the 1970s and 1980s in the U.S., his films circulated regularly in specialized cinemas in New York, Washington, D.C.; Boston and Los Angeles. However, he's someone who was a little bit off of the radar of scholars based in the U.S. publishing on auteur cinema,” Bowen said. “That said, he certainly was not off the radar of French scholars or Italians. Heading into last year, one could find a dozen books on him in Italian and three books in French, but none in English. That’s what prompted my colleague, Rémi Lanzoni, and I to put an edited volume together, for which we gathered 14 contributions from scholars based in five different countries.”

Bowen attributes some of the renewed interest in Scola to the author’s death in 2016, but he said it was growing even before then, noting DVD releases of two of the best-known films for which Scola wrote screenplays. The Criterion Collection has also released a DVD of 1977's Sophia Loren-Marcello Mastroianni pairing, "A Special Day," and included other Scola works in its streaming services,

Scola was a communist, and Bowen said his films reflect his personal anti-fascism as well as his criticism of exploitative capitalists and ineffective intellectuals and politicians, but never in a heavy-handed way.

“Scola used allegorical characters in his films to refer to different political leanings and utilized irony to emphasize the hypocritical traits and weaknesses of each,” Bowen said.

Because of his offscreen political activism in the last decades of his life — mainly in defense of sites of film production, exhibition and education (i.e., film schools and museums) — Bowen labels Scola a “statesman for Italian cinema.” He strongly believed in the role that cinema could play in the education of young people, especially in helping them to develop a more critical view of society. This is one of the qualities that Bowen, as a teacher of Italian cinema, admired most about the director.

"I know many professors who have found his films to be effective in introducing students to major moments in Italian history, but also in having them reflect on the effects that historical events have on individuals and their relationships," Bowen said. "In recent years, people are starting to pay more attention to the fact that he wasn't just a director who was capable of making a comment on society at a specific moment, or over a period of time, but that his signature style also contained many stylistic achievements, including his innovative use of flashbacks, long takes, visual transitions and voiceover as well as a broad range of comic techniques, including his use of the grotesque register,” Bowen said.

“Some U.S. critics in the late 1970s and early 1980s, including Roger Ebert, struggled to accept some of Scola’s grotesque portraits of contemporary Italy and preferred his historical films, but this trend hasn’t persisted," Bowen said. “The recent rerelease of his grotesque comedy 'Ugly, Dirty and Bad' in New York theaters and in streaming by Film Comment attests to a growing reevaluation of his work."