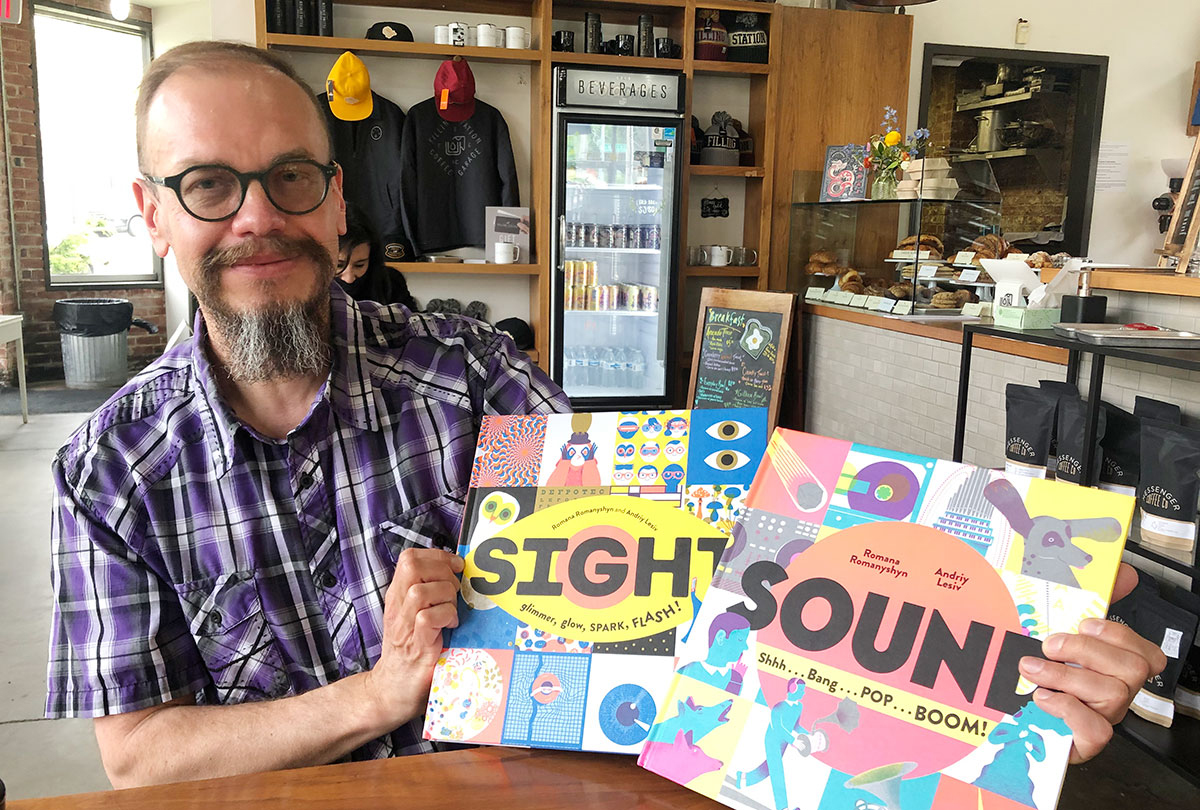 LAWRENCE – Unless they dwell on the authors’ names, the average American child drawn in by the colorful new books “Sound” and “Sight” (Chronicle Books) will have no clue that they were originally Ukrainian.

That’s a tribute, in part, anyway, to the work of a University of Kansas associate professor of Slavic Languages & literatures, who translated the books into English. It’s the latest of Vitaly Chernetsky's efforts to build cultural exchange and international understanding with his translation work.

The Odessa native has spent large parts of the last few years translating into English the novel itself and the film-script adaptation of Sophia Andrukhovych’s acclaimed book “Felix Austria,” a romance that elucidates Ukraine’s multiethnic makeup.

His latest translation to be published are two children’s books written and illustrated by the Ukrainian wife-and-husband team Romana Romanyshyn and Andriy Lesiv: "Sound" (2020) and the forthcoming “Sight.”

Chernetsky said that as newly independent Ukraine’s book industry outgrew the domination of the Soviet system in the 21st century, Romanyshyn and Lesiv were establishing their reputations as two of the nation’s most acclaimed graphic designers.

In the first book that they wrote and illustrated together, “The War That Changed Rondo,” (2015) the circular title character is a metaphor for the Ukrainian nation – battered and scarred by war (i.e., Soviet/Russian aggression) but bravely carrying on.

It was published by the same leading Ukrainian publishing house, Old Lion, that published “Felix Austria.” So when editors there decided to publish “Sound” and “Sight” in English, they thought of Chernetsky as their translator.

Although “Rondo” drew praise for treating the serious issue of trauma in a positive way, Chernetsky said the authors decided on something lighter for their next project. “Sound” and “Sight” explain from various viewpoints, from anatomical to physical to philosophical, how humans hear and see.

This project was a change from Chernetsky’s more serious work, incorporating as it does the words and letters as part of the colorful drawings. The biggest challenge in translation, he said, was keeping it tight.

“The text plays second fiddle to the images, but it still needs to be something that readers don't stumble on,” Chernetsky said. “It helps deliver the message, which in this case primarily comes from the visuals. It's short. Very often it’s very, very short. It's almost like subtitles for a movie, where you do not want to be wordy because you do not want the subtitles on the screen to be overwhelming.”

Chernetsky said some aspects of translation remain the same, regardless of the type of literature.

“As with a book for adults, you need to make sure that a successful translation works in the context of the target culture,” he said, “especially because it is popular science. The fact that it is Ukrainian is incidental. But if people find out, OK, cool.

“There are not many children's books brought into the American book market that were originally written in other languages,” Chernetsky said. “This is an exception, rather than a rule. So to have one of the leading publishers of children's literature in Chronicle Books publish something from Eastern Europe, it’s a very unusual and a big event.”