LAWRENCE — Politicians discuss the ins and outs of health care while trying to win votes, but for some Americans, policymakers do not seem to be listening. University of Kansas researchers have published a study about perspectives of individuals with disabilities on health care policy, and respondents overwhelmingly stated access to health care is vital and they would like policymakers to pay more attention to their needs. 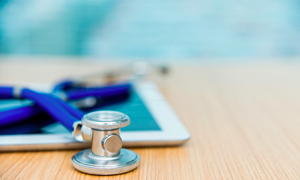 Scholars analyzed data from 35 phone interviews and survey responses from more than 475 individuals with disabilities about health policy. While the respondents largely reflect the political opinions of American society at large, they tended to agree that health care should be viewed as a human right and that feelings of social exclusion and stigma inform what they would like to tell officials who make health policy in the United States.

“We found that people with disabilities are marginalized and stigmatized and that policymakers don’t listen to them,” said Sarah Smith, a doctoral candidate in sociology, graduate research assistant at KU and lead author of the study. “They also felt that access to health insurance was important in order to be able to take part in society and that policymakers did not consider how the policies they make affected their lives.”

The study, published in the Journal of Disability & Policy Studies, was co-written by Smith; Jean Hall, professor of applied behavioral science and director of KU’s Institute for Health & Disability Policy Studies, and Noelle Kurth, research associate at the institute. The interviews and surveys revealed five key themes about health policy perspectives among people with disabilities.

Respondents nearly uniformly reported how important employment was to their lives in terms of financial security, access to health insurance, not depending on state programs for health coverage and for personal dignity. However, they also faced many barriers to employment, especially those living in states that have not expanded Medicaid who tend to lose eligibility when they are employed.

“Employment is a key component of being part of society and a big part of personal identity,” Smith said. “But it can be very hard to access, and most health insurance is tied to employment, which also makes insurance difficult to access, especially if you’re not employed full time.”

Many study participants also shared that policymakers do not consider the needs of constituents with disabilities.

“I hear politicians on the TV talking about me as if I am the cause of the budget deficit,” one respondent said. “They seem to lump us into a group of people—well, not people: ‘You’re the budget deficit, you’re this, you’re that,’ instead of saying, ‘These are people who need care.’ Maybe the number one thing, then, is an attitude change. You’re not dealing with line items on a budget; you’re dealing with what real people need.”

Previous research has shown political leanings of people with disabilities are representative of those of American society at large, and participants used a variety of arguments for a matter they agreed on: Policymakers should care about individuals with disabilities. The arguments included that no one chooses to be disabled, anyone can become disabled, better health care access will lead to more productive society, all individuals should matter to policymakers as human beings and that politicians should make the health care policy for all like what they want for themselves and their families.

Health care was viewed as a human right, not something that should only be available to certain members of society, the findings showed.

“Policymakers already know that restricting access to health care has outcomes that range from loss of income to loss of life,” one participant said. “True access means that all citizens, regardless of their ability to pay, have access to the same range of services. Like water and an unpolluted environment, health services are essential to life, liberty and the pursuit of happiness.”

The study’s participants also expressed largely positive opinions about the Affordable Care Act. Many reported that they still struggled with health care costs but were at least able to get health insurance through the act. Primarily, the law’s health insurance premium subsidies, coverage for preexisting conditions and Medicaid expansion were important to study participants.

Taken as a whole, the results show the connections among disability stigma, health policy and politics. Previous research has shown that people with disabilities face barriers to political participation, similar to those they face with employment and participation in society, and as a result their voices are often underrepresented in health policy discussions, even though their lives are greatly affected by the policies enacted. As key participants in programs such as Medicare, Medicaid and Social Security, the population can provide vital insight into the functioning and outcomes of those programs, the authors wrote. As America’s population ages and the COVID-19 pandemic affects more people’s long-term health, new complications to health care access can be expected, which the authors plan to address in future research.

“This is a population that knows a lot about health policy, because they have to know a lot about navigating insurance and health care systems. Policymakers should listen to them,” Smith said.