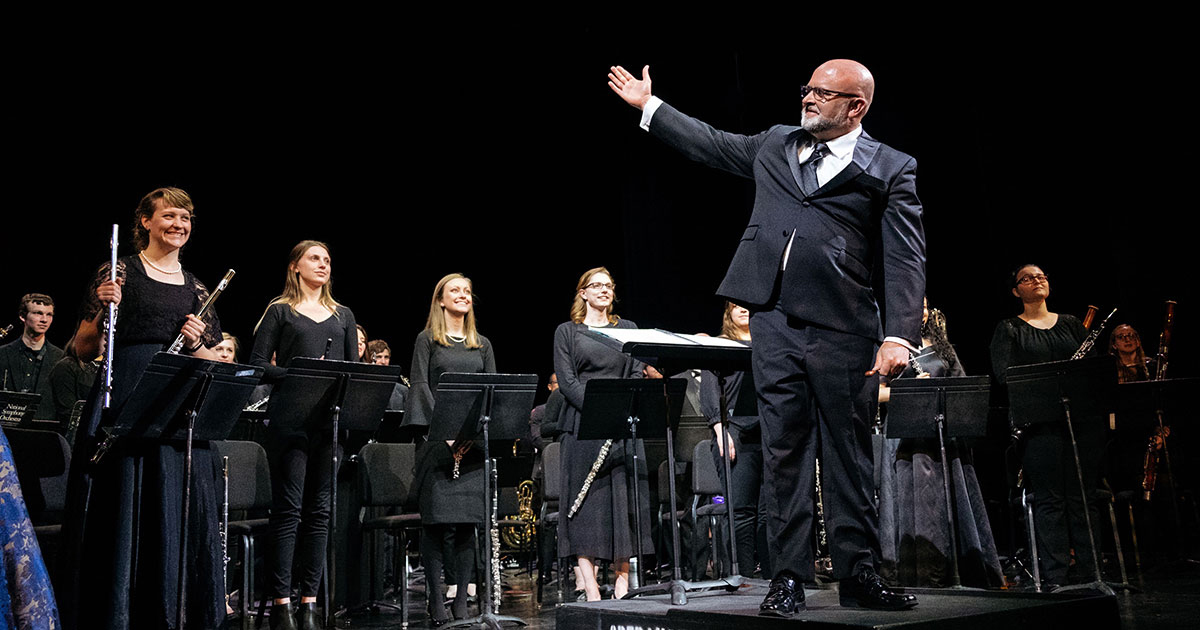 LAWRENCE — FDR and democratic socialism. Immigration and the human rights of people forced to flee across borders and oceans. What makes a heart-wrenching photo go viral.

The issues that inspired and, in turn, are raised by the new album “Freedom from Fear” (Naxos, 2020) featuring the University of Kansas bands and choirs are torn from the headlines of recent years. 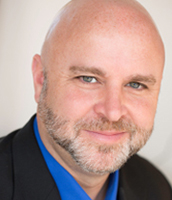 “It was three years ago that we were in the process of conceptualizing it, and two years ago that we premiered it,” KU’s Director of Bands Paul Popiel said. “But every day the headlines come through, and I think this has not faded from national or international relevance. You always wonder what the staying power of a piece of art might be when political times change. But so far, it has been just as relevant.”

In addition to guiding all aspects of KU’s School of Music band program, Popiel conducts the KU Wind Ensemble, the featured group on “Freedom from Fear.” The recording also includes KU’s Men’s Chorus, Jazz Ensemble I and several soloists.

“Freedom from Fear” draws its title from President Franklin Delano Roosevelt’s 1941 “Four freedoms speech” as well as the United Nations’ 1948 Universal Declaration of Human Rights, in which it is enshrined.

“It started with a good friend and donor to the university, James Zakoura, and his organization Reach Out Kansas,” Popiel said. “Jim has sponsored and supported several major pieces in the past several years. He's an attorney and a music lover. Although his family is Middle Eastern and mine is Polish, we share a common story — like almost all of us here in America — of immigration to the United States. So in light of the immigration crisis, we started to talk about manifesting that in a musical project.”

What brought it to a head was the 2015 viral photo of a Syrian war-refugee child named Alan Kurdi, who had washed up, face down on a beach, trying to reach Turkey.

“In so many ways, it told one of the common threads of this immigration crisis,” Popiel said. “That resonated with Jim and me. So we connected with a composer friend of mine, Kevin Walczyk, and ended up commissioning him to write a piece.

“Kevin was interested in telling this story with a wide lens that included the Syrian immigration crisis ... but relating it to the forced removal of any fellow man from their homeland to a foreign place. That’s why the piece has elements of Syrian folk song and blues and these wide-ranging things. But the unifying theme is immigration.”

The full recording includes three works. In addition to Walczyk’s nearly 40-minute, four-movement Symphony No. 5: "Freedom from Fear – Images from the Shoreline," the other tracks are David Maslanka’s “Liberation” and Aaron Perrine’s “In the Open Air, in the Silent Lines.”

The performances were recorded at the Lied Center of Kansas just before the symphony premiered at the Kennedy Center on April 29, 2018.

“Zakoura thought it needed to be premiered in a place that would deliver a message,” Popiel said. “On our site visit to the Kennedy Center, the best space happened to be the Eisenhower Theater. And Jim couldn't help but think it was providential that a group from Kansas, coming to do a symphony about the immigration crisis, would be performing it in the Eisenhower Theater at the Kennedy Center. So that's how that happened.”

Given the huge investment of time and logistics required to bring together the various student ensembles along with the instrumental and vocal soloists, Popiel said, he came to believe there was a need to record the symphony’s performance. And officials of Naxos, the world’s premier classical music record label, expressed interest in releasing a recording as soon as they heard about the project. Since the recording session nearly two years ago, there was a period of months of editing and mixing the recording, after which it entered Naxos’ queue for a March 27 release.

In Walczyk’s symphony, both Alan Kurdi and his mother come back to life, singing of their faith and their love for one another. They are voiced, respectively on the recording, by soprano and KU graduate Gretchen Pille and a then-14-year-old Lawrence resident, Ashton Rapp.

In the final movement – "Sea Crossings, Mother of Exiles" – the mother’s voice merges with that of the Statue of Liberty.

“When Kevin was waist-deep into the piece, there was not a planned appearance for the Statue of Liberty,” Popiel said, “until a very high-ranking federal official made some disparaging comments about the huddled masses and the type of people we don't want coming in as immigrants. That inspired Kevin to reinvest in the dream of what the Statue of Liberty represents and the Emma Lazarus poem on its base. It ended up being quoted and sung, so the soprano transforms from the Syrian mother to later singing the inscription from the Statue of Liberty.”

Popiel is pleased with how the performances and the recording of them turned out.

“Very few other universities would try to do something like this, but we’ve taken it a step further and recorded it as a commercial disc released worldwide,” he said. “I think speaks to the depth and strength of the music program at KU. ... We're hoping for Grammy nomination.”

Photo: Members of the KU Wind Ensemble and Jazz Ensemble I were joined by several soloists and conducted by Paul Popiel in April 2018 at the Kennedy Center for the premiere of “Freedom from Fear.” Credit: Andy White / KU Marketing Communications