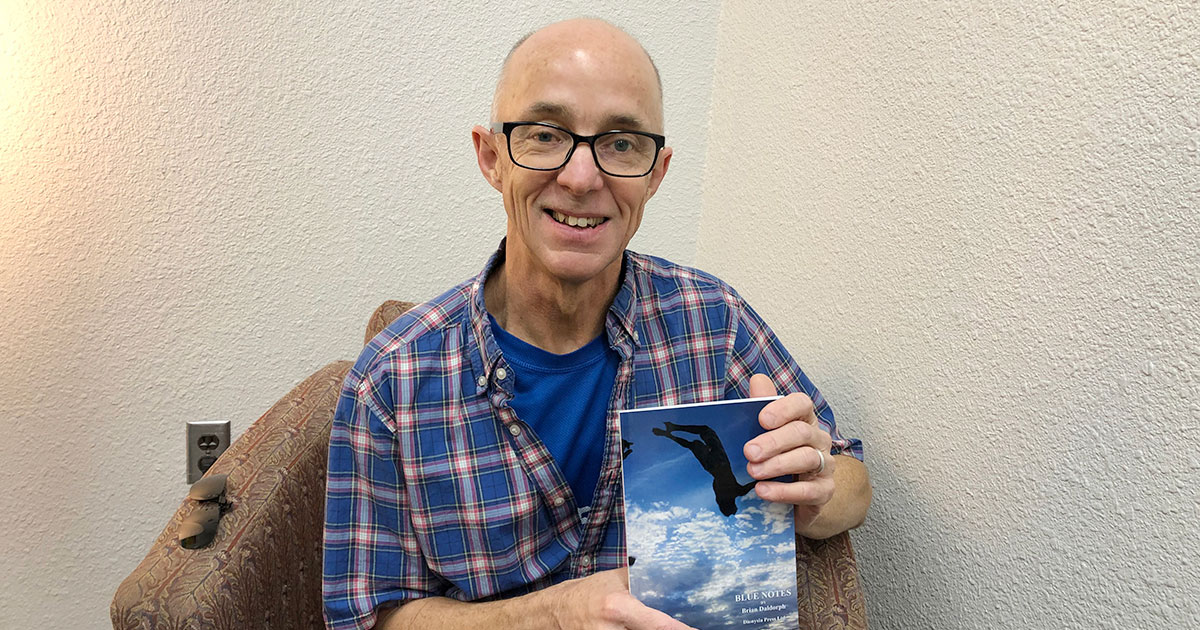 Daldorph’s sixth book is a meditation on the power of music to give our lives meaning.

A senior lecturer in the Department of English at the University of Kansas, Daldorph grew up in Great Britain during the punk era, and bands like the Sex Pistols, Buzzcocks and Damned are name-checked in this collection, too. But hard rockers are a minority in the book, which starts with jazz and moves through blues and country – even touching on reggae – for inspiration.

“Some of the poems are based on particular incidents, but some of them are more like dreams or imaginations,” Daldorph said. “I would say that there is a truth in them, but it's kind of a larger truth. I mean, all of them were written about things that I had experienced, but sometimes I imagined certain situations or specific triggers to try to illustrate the truth that I felt about that situation.

“So, for example, the poem about Bob Dylan. I didn't go and see him with my dad. I've seen Dylan maybe 10 or 12 times, but I imagined how it would be talking to my father about Dylan and the whole controversy about Dylan going electric. It sort of starts in a place that I have experienced, but then I take it a little bit further in some of the imaginations. Some of them are more literal than that. Some are quite specific.”

One section the book is subtitled “On the Road,” and in those seven poems Daldorph imagines himself as a working musician, mostly one struggling to make it in the 21st century digital economy. In “The Morning After,” he writes:

Sold a CD last night to a kid with burning eyes

who said ‘You’re doing it, man,

At least one person got it.

And while some poems like “Mick Taylor’s Hotel Room Blues” contain call-outs to specific people, places and songs, others are ruminations on iconic figures and themes. The first line of “Guitar Man,” for example, is “Another lonely night, some nameless town...”

Daldorph said he would have liked to have become a musician himself but soon realized he didn’t have the knack for it. And so he has tried to honor his working-class heroes like Dylan and John Lennon in the form of poetry.

“They have kind of offered us an alternative view of society, and, to my mindset, better views of the sort of society we might be,” Daldorph said.

Not only did Daldorph wish to honor his own heroes, but to call attention to the enormous power that music has over those who appreciate it.

“Music can save you in difficult situations,” he said. “That's certainly something that I found in music.”

One section of the book is called “Funeral Songs” for those “songs that I would like to have played at my funeral,” Daldorph said. “The reason is because those songs have meant so much to me, and they've gotten me through times that I'm not sure how I would have gotten through without them. Just to know that there is somebody else saying what you're feeling ... that's enough to keep your head above the water.”

Daldorph said the poems in “Blue Notes” were written over a period of 20 years or so. At some point, he culled his archives for all the poems he’d written about music, found it was more than 200, and from them he chose the top 59 for the book.

“The things that I said then, I still stand by,” Daldorph said, “and I thought that the poems that I had written about then are still valid to my experience and important poems to me. And then some of them are quite recent, so they are written over a really long period.”