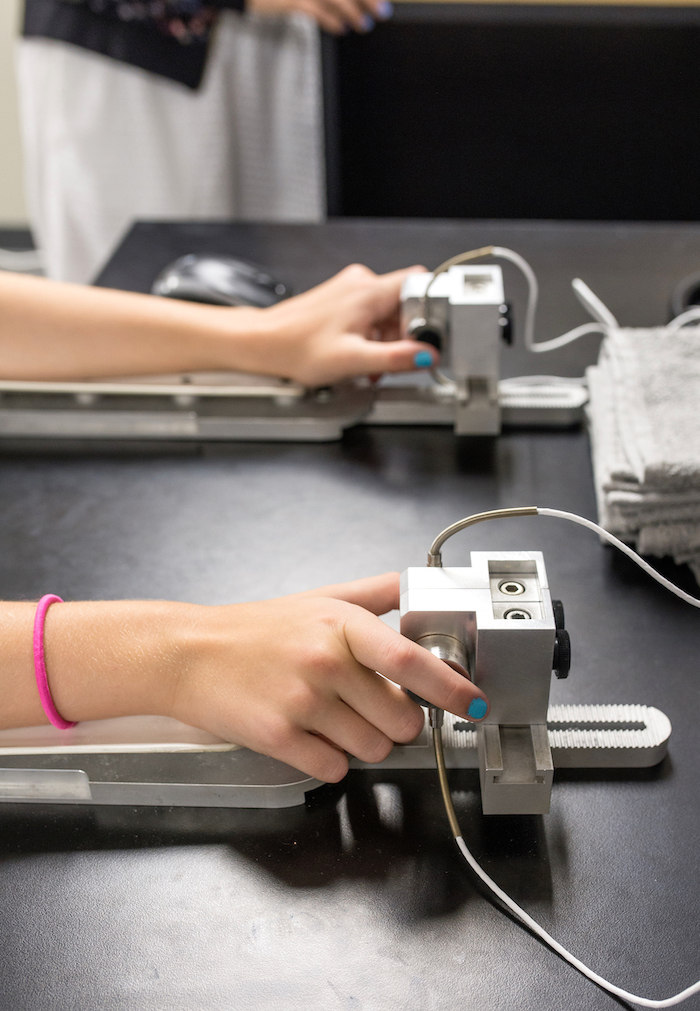 LAWRENCE — A new study in the Journal of Neurophysiology by researchers at the University of Kansas Life Span Institute is the first to look at functional brain activity in people with autism spectrum disorder (ASD) while they performed precision visuomotor behavior — in this case, a grip-force test.

The authors found new evidence sensorimotor changes in people with autism involve abnormal cortical and subcortical organization “that may contribute to key clinical issues in patients.”

People with autism performed a precision grip-force test while being scanned inside an MRI machine. They watched a display containing two horizontal bars set against a black background. The subjects controlled the bars in specific ways by pressing a device in their right hand. So did a control group of people without ASD.

“In areas of the brain for dynamically incorporating and adjusting your motor behavior based on information you're receiving, those circuits were deficient,” said lead author Kathryn Unruh, a postdoctoral researcher at KU’s Life Span Institute and Kansas Center for Autism Research and Training (K-CART). “But then we also show that people with autism are potentially compensating for those deficits by using other areas of the brain.”

While ASD is diagnosed based on deficits in social-communication skills and the presence of certain restricted and repetitive behaviors, those are difficult for researchers to objectively measure, as opposed to brain activity during visuomotor tasks, Unruh said.

“Motor behaviors are deficient across individuals with autism, regardless of their level of functional ability,” she said. “Sometimes it may look like something very subtle in their eye movements that you would never be able to see without special equipment. It could look like handwriting problems or sometimes could also look like having problems with more general motor coordination, like playing sports.”

The precision grip test used by the researchers allowed them to isolate and examine one task and its associated brain activity as they measure differences among 20 subjects with ASD and 18 without.

“We’re able to quantify this very precisely,” Unruh said. “Trying to put a number on someone's social ability or their communication — it is very difficult. So, this is an attractive way of measuring behavior. Here, we’re getting a much closer approximation of what the brain is actually doing.”

Senior author Matt Mosconi, director of K-CART, an associate scientist in the Life Span Institute and associate professor in the Clinical Child Psychology Program at KU, said in ASD patients sensorimotor problems can be frustrating for them, and they often go overlooked because communication and behavioral issues are the things others usually focus on.

“Sensorimotor issues, or difficulties coordinating and controlling our movements, are common in ASD and often a major source of frustration as they affect many of our daily activities,” he said. “Studying sensorimotor issues is therefore important for understanding the diverse challenges experienced by individuals with ASD.”

Not only did the study show the brain is organized differently in individuals with ASD in terms of its function for basic sensorimotor behaviors, but these functions can differ between people with autism.

“Importantly, as we know every individual with ASD shows different sets of skills and challenges, we also found differences in brain organization varied across our individuals highlighting the importance of testing measures of brain function in relation to different behaviors, rather than just relying on simple comparisons of individuals with ASD and individuals without ASD,” Mosconi said.

The researchers are actively seeking individuals with ASD and individuals without ASD ages 10-35 years for ongoing NIH-funded studies of sensorimotor behavior and brain function. Contact ndrlab@ku.edu for more information.

Photo: People with autism performed a precision grip-force test like this one while being scanned inside an MRI machine. Credit: Life Span Institute/Leilani Photographs.