LAWRENCE — During the Obama administration, conservative states pushed back heavily against the president and his policies, challenging federal power with success previously unseen. Conservative governments and state-level office holders were so successful their playbook is now being used by liberal states to resist the Trump administration agenda. A University of Kansas professor has written a new book examining how states began that push, the confluence of factors that made it possible and how people can understand how state governments are becoming more powerful than they’ve been in a century. 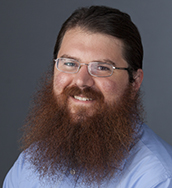 Ben Merriman, assistant professor in KU’s School of Public Affairs & Administration, wrote “Conservative Innovators: How States are Challenging Federal Power.” The book takes a multidisciplinary approach, examining how sociology, political science, law and public administration can help understand this unique evolution in the importance of state governments and their resistance to federal power. The text analyzes the factors that have allowed the shift to take place and how its successes have been taken up by those of differing political philosophies.

“You could think of these four disciplines as each laying down a cornerstone for the arguments for my book,” Merriman said.

When Barack Obama took office, his administration quickly set to work on policy initiatives that conservatives opposed. The Affordable Care Act and financial reforms and regulations in the wake of the financial disaster of 2008 were chief among them. In Obama, governors, attorneys general and secretaries of state had a common figure to oppose, Merriman points out. In the opening chapter he outlines how they devised a remarkably successful strategy to oppose such initiatives and how they did it. After the 2010 midterms, Congress was highly uncooperative with the president, which led to more action being taken through executive orders and administrative rules. Such measures were much more vulnerable to court challenges, and multistate lawsuits were highly successful. Record numbers of lawsuits against the federal government were filed, and record numbers of victories piled up for conservative states.

“Historically, the presidency wins a lot of cases. This was the first time in the modern era that states were just as likely to win,” Merriman said. 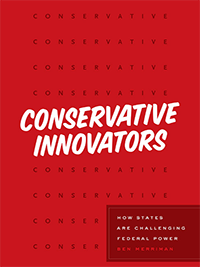 The book points out how growth in executive power in all levels of government coincided at the time. While partisan gridlock ruled at the federal level, one-party dominance of state governments expanded. Simultaneously, state legislatures lost strength. Kansas provides a good example: Citizen legislators, who only work in the capital about four months out of the year, do not hold the same influence as administrators there year-round.

“At the state level, the power lies with a handful of administrators who are also elected partisans,” Merriman said. “They have tremendous powers and a political incentive to use them.”

Further chapters highlight how litigation became a central strategy in the conservative movement and how states increasingly banded together to legally oppose Obama administration efforts, including the Affordable Care Act, environmental protection, voting rights and immigration policy. The book also examines interstate compacts, showing how they expanded beyond the usual agreements on issues such as water rights, adoption or law enforcement to coordinate opposition to federal policy on a wide scale. Merriman pays close analytic attention to movements such as the Compact for a Balanced Budget, an interstate agreement to require balanced federal budgets, which enabled states to turn passing state interest in the issue into a permanent structure that can influence federal policymakers on an intergovernmental basis.

Conservative states have been especially active in overseeing elections and implementing policies, making it more difficult for citizens to register to vote or cast a ballot. A chapter in “Conservative Innovators” explores how federal voting rights measures are relatively new and mostly set by judges. While the federal government has limited power to oversee elections, states have eagerly stepped in, especially after the Supreme Court weakened the Voting Rights Act. Policies that have regularly affected poorer, older and minority voters have withstood judicial challenges, as they have been crafted as measures to defend election integrity.

Finally, the book takes a look at movements in Kansas that illustrate the larger conservative state movement. Former Governor Sam Brownback and allies used the state as a self-described “experiment” in small government policies, including sweeping tax cuts, new school funding models, reorganization of administration, partial privatization of Medicaid and other efforts. While many were unsuccessful or have been repealed, they were all initiated in the executive branch and have been strongly defended, which Merriman argues provides keen insight into the ethos of conservatives the book studies.

The success of state-based conservative resistance as a political model is made clear by the first year of the Trump administration. Drawing upon conservative approaches, states such as California and New York actively resisted the administration’s goals on immigration, environmental policy, trade and other issues. This opposition is not an isolated incident specific to one era or administration.

“I view this as an emerging new normal in American politics, and what I see happening is a shift to increasing state-federal conflict,” Merriman said.

For one political side to adopt opponents’ successful strategies is not new, having happened several times throughout American history. However, the success and subsequent strategic adoption of resistance to federal power through executive, state-level action is unique, Merriman said, and illustrates how important it is for scholars and those interested in American government and politics to study the work of state governments.

The School of Public Affairs and Administration will host a book release reception for Merriman from 5:30 to 7:30 p.m. May 9 at the Brosseau Learning Center in the Spencer Museum of Art. Merriman will give a presentation on the book, immediately followed by a reception with light refreshments.