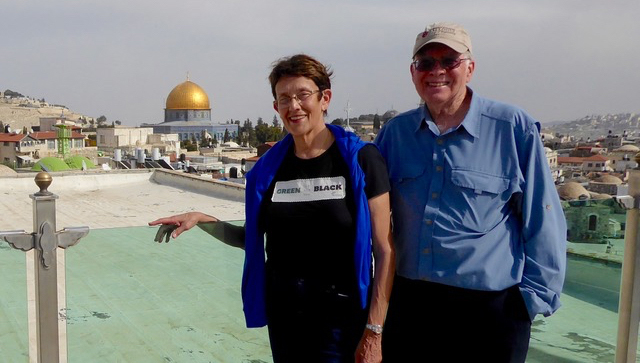 LAWRENCE — A gift from the E. Eugene Carter Foundation establishes an annual opportunity award fund to benefit female Hispanic students in the School of Engineering at the University of Kansas.

The award will provide up to $20,000 per student annually to pay off subsidized federal loans upon graduation from an engineering program at KU. There may be more than one awardee each year, with preference for first-generation students.

Gene Carter, of Arlington, Massachusetts, said while many factors influenced his decision to make the award available at KU, one of the most important is encouraging students to complete their degree.

“My wife’s experience as a young refugee and my childhood ties to Kansas greatly inspired me,” Carter said. “Providing an incentive to graduate is important, as well, and a loan repayment award like this one encourages students to persevere.”

Although Carter does not have academic ties to KU, he grew up in Kansas and previously had established a scholarship at KU in honor of a close childhood friend.

Carter met his wife, Rita Rodriguez, at Harvard, and they married in 1972. She came to the United States in 1960 at 16 as a Cuban refugee; she learned English in a remedial high school class, using a dictionary and a textbook. After going to junior college and a four-year university in Puerto Rico, she had enough money for one semester at New York University. Eventually she earned a doctorate in international economics.

“She is very grateful for her life in the U.S.,” Carter said. “She succeeded amazingly, but she never lost sight of the fact that others helped her and society helped her.”

“Enhancing the student experience and providing the necessary academic and financial support to help our students succeed is a top priority for the KU School of Engineering,” Agah said. “This fund will provide a unique opportunity for underrepresented students at KU Engineering. We are thrilled to establish this award and thankful to Gene Carter for the gift.”

Carter, a native of Wichita, earned a bachelor’s degree from Northwestern University in 1964, where he was an F.C. Austin Scholar. That scholarship became pivotal, Carter said, because it sparked his interest in student support.

A fellowship took him to Carnegie Institute of Technology (now Carnegie-Mellon University), where he earned master’s and doctoral degrees in industrial administration. During that time, he also received a Woodrow Wilson Fellowship and a Ford Foundation Doctoral Dissertation Award.

Carter taught finance at Harvard Business School and was a visiting professor at the MIT Sloan School of Management. He served as associate dean of the College of Business and professor of finance at the University of Maryland, College Park. He also was a private investor in A. G. Edwards and served over 30 years as a public director. He was lead director and chair of the audit committee until the firm was sold in 2007.

Rodriguez taught international finance as the first full-time female professor at Harvard Business School. She served under three U.S. presidents as an independent director of the U.S. Export-Import Bank, a position she held for 16 years. She was a senior fellow at Woodstock Theological Institute and has served on several corporate boards.