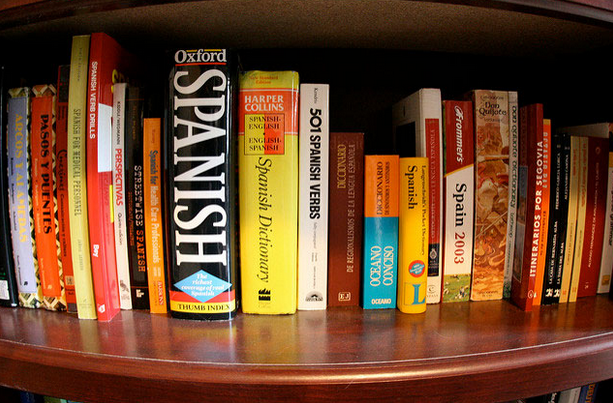 LAWRENCE — When learning a new language, people often come across new sounds or unfamiliar grammar rules. So while they may be able to communicate with native speakers, incorrect pronunciation and grammar can result in negative perceptions or miscommunication. A University of Kansas professor has been developing a new instructional model for language education that boosts focus on grammar and pronunciation and gives learners a deeper understanding of the rules of a new language while boosting their retention.

Manuela Gonzalez-Bueno, associate professor of curriculum & teaching at KU, has been developing S-PACE, a communicative form-focused language model designed to increase student intake. She has authored a chapter on the model for the book "Key Issues in the Teaching of Spanish Pronunciation: From Description to Pedagogy" and will give a keynote address about it at the International Congress of Modern Language at the University of Costa Rica in December.

“We teach language in a more contextualized way now than we used to. You learn to communicate in a real-life way,” Gonzalez-Bueno said. “This has been applied both in immersion and non-immersion schools, but there has not been as much focus there on form. Pronunciation and grammar are two formal, very important parts of language with rules one must follow.”

Gonzalez-Bueno developed S-PACE to help learners boost their accuracy in those two areas of language. S-PACE is a technique to teach and facilitate intake of the linguistic form — grammar and pronunciation. It is developed from two existing models: Donato and Adair-Hauck’s PACE Model, a whole-language approach to teach grammar in a communicative way, and VanPatten’s Processing Instruction, more of a bottom-up approach to teach grammar that includes controlled structured input and output exercises. The resulting model, S-PACE, is a whole-language and a discrete-form perspective integrated in a fluid procedure that does not deviate from the communicative nature of lessons.

“What I never liked of the traditional PACE model is that there seems to be a huge gap between understanding a rule and applying it in real communication. By adding structured input and output exercises adapted from Processing Instruction, learners have the opportunity to apply the newly learned rule in a controlled way before jumping to more open-ended communicative activities,” Gonzalez-Bueno said.

To address that, S-PACE first adds structured input exercises consisting of learners having to identify — by reading or by listening — whether a particular rule is being applied or not in certain sentences. They are forced to make a choice between two options based on the grammatical (or phonological) form in order to complete the exercise.

At this time, learners do not produce any language, but they have to process the new rule in a way that it becomes part of their long-term memory, therefore available for use in other different contexts at a later time. For example, they select adjectives with gendered endings as they identify the noun the adjective should be describing according to the noun’s gender. Once intake of the rule has happened, they complete output exercises, this time producing language in a very controlled way. Only after that are they ready to use the new rule in more open-ended activities.

In terms of pronunciation, S-PACE can be used to make learners aware of the existence of sounds that don’t exist in English or that exist but in different distribution. For example, the Spanish sound represented by the grapheme “ñ” doesn’t exist in English. English-speaking learners of Spanish tend to replace it with “n” — which at times can result in embarrassing mistakes, like saying “ano” (anus) instead of “año” (year). S-PACE will present learners with exercises that force them to discriminate between these two sounds and identifying them in word pairs such as mono (monkey)/moño (hair bun); una (one)/uña (finger nail); pena (sorrow)/peña (boulder), in controlled communicative exercises.

The new model is designed to seamlessly complement any language lesson with communicative exercises. It helps students learn grammar and pronunciation rules and practice them with other learners and native speakers while using what they learned in new ways instead of simply repeating phrases or words that were provided to them.

The S-PACE model can be used to teach grammar and pronunciation of all languages, not just Spanish to English-speaking learners, Gonzalez-Bueno’s specialty. She will continue to conduct research on its effectiveness. Her work has already shown that when students who took Spanish classes with the added structural input and output exercises of S-PACE and without, that is, with the traditional PACE, both improved their language skills. However, the retention was better for those who learned using S-PACE.

“That’s the premise. You’re providing enough structured input, meaning you are boosting what the students understand and helping them maintain what they learned,” Gonzalez-Bueno said. “This is particularly helpful for the formal, rule-governed parts of language, grammar and pronunciation. It helps put the focus on form so you can acquire a language and use it properly.”