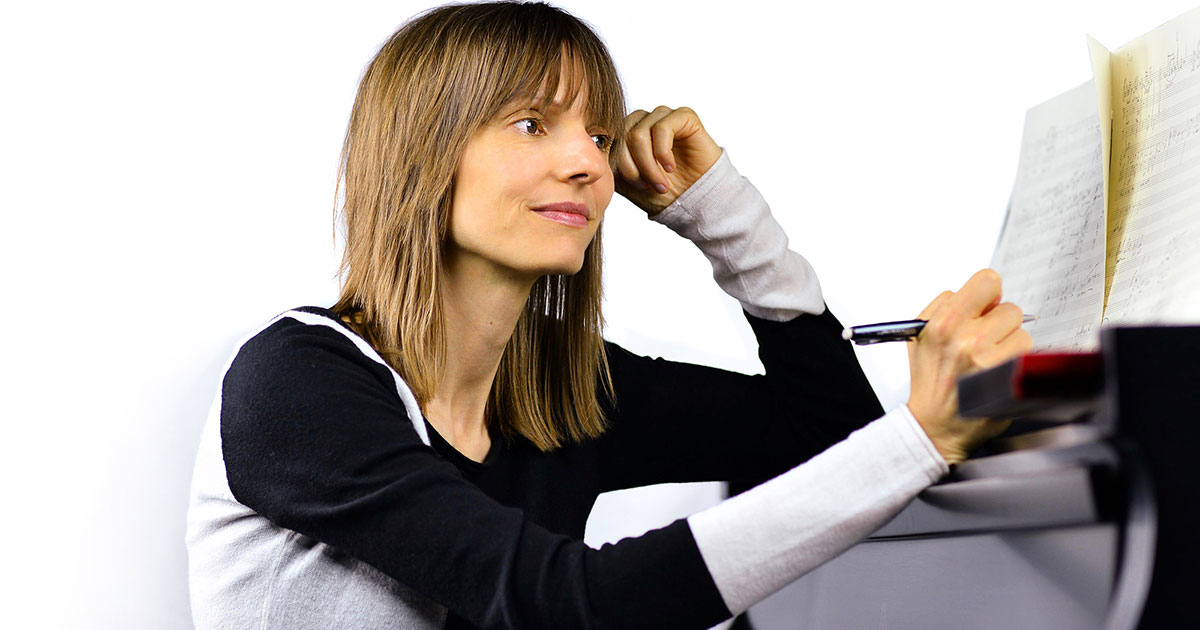 LAWRENCE – Ingrid Stölzel is all about the goosebumps – the emotional effect that contemporary classical music can have on the listener.

Now an assistant professor of composition in the University of Kansas School of Music, Stölzel has followed that philosophy throughout her career as a composer, including on her first, commercial solo recording, “The Gorgeous Nothings,” released July 13 on Navona Records.

“If I had to boil down why I want to create music, it is because of the amazing things music can do,” Stölzel said. “I can think about a piece of music and induce goosebumps in myself. It’s called frisson when the hair stands up on the back of your neck. You can be transported when you listen to something. You lose track of time. One of my favorite quotes is from the writer Thomas Mann: 'Music awakens time.' I really believe that music has a way of awakening time and also has the potential to induce emotion in us. That’s the part that, as a kid, I just really loved, and I wanted to do it.”

Coming from a musical family, Stölzel studied piano as a child and still composes at the keyboard.

“I always liked making up stuff instead of memorizing Mozart,” Stölzel said. “I still make stuff up, but now most often I give it to other people to play; that’s the big difference.”

Performers on “The Gorgeous Nothings” include her fellow School of Music faculty members Margaret Marco, professor of oboe, and Ellen Sommer, lecturer of piano; as well as KU alumna mezzo-soprano Phyllis Pancella.

Stölzel moved from her native Germany to the United States in 1991 to attend the University of Missouri-Kansas City Conservatory of Music, and, after living in Connecticut, returned to the area in 1998. Her works have been performed by KC’s New Ear ensemble, among many others, and recorded by artists including pianist Leah Hokanson and Sideways Trio. She writes for every size and type of classical music grouping – solo, chamber, orchestra, choir.

Critics have called her sound gorgeous and lyrical, which Stölzel takes as a compliment.

“I would consider myself a melodist, definitely,” she said. “I believe in the power of melody. I think it’s very hard to write a really good melody.”

In this way, Stölzel can be seen as part of a new generation of composers who go against the ethos expressed by modernist composer Milton Babbitt in his infamous 1958 essay “Who Cares if You Listen?”

“In the 20th century, intellectualism took over, and we perhaps made audiences feel if you don’t get this, you are stupid,” Stölzel said. “In reality, when you listen to music, all that matters is your own emotional response to it. It doesn’t have to be an intellectual exercise. It can just be: Do you get moved by it; do you enjoy it; do you hate it; do you get inspired by it?”

For her first recording under her own name, Stölzel said, she was inspired by the writings of American master poets Walt Whitman and Emily Dickinson. “The Gorgeous Nothings” is the title of a 2013 collection of Dickinson’s previously unpublished writings that reproduces the scraps of paper on which she wrote them. Stölzel’s five-song cycle for flute, oboe, piano and soprano by the same title opens the record. “Soul Journey – Three Whitman Songs” is for mezzo-soprano and piano. Stölzel said the poems she picked were those that made her say to herself: “There is a piece of music in that! I read the text and thought I can express that musically.”

Concerts, she said, often provide evidence that audiences get her intention.

“One of the biggest compliments to me is when a musician or audience member is moved by something I have written,” Stölzel said. “This fourth movement, ‘The Little Sentences,’ in this Emily Dickinson setting, is kind of humorous, and I love it when the audience gets it! They chuckle at the end.

“This song cycle here, it’s three really deep Whitman texts from ‘Leaves of Grass,’ but in the middle one, he talks about the animals and the trees and how everything has a soul … I set it very playfully, and it’s always wonderful to see the audience react to the emotional sound world I was in.”

The last of the Whitman songs, “Dearest Thou Now, O Soul,” is “a deeper, spiritual piece — a soul journey,” Stölzel said, concerning “the last chapter in your life, when you are getting closer to transitioning, and I have had older people come up to me with tears in their eyes after hearing it. It’s the Whitman text. I am not claiming it’s all me, but I hope my music helps to underscore the emotion …”

Stölzel has previously been awarded several competition prizes for her compositions, while “The Gorgeous Nothings” won the 2018 Suzanne and Lee Ettelson Composer’s Award given by Composers Inc.

Stölzel said she plans to organize a recital on campus featuring music from “The Gorgeous Nothings” when school resumes in the fall.

Search options »
Subscribe to KU Today
KU in the news
The Irish Times — Mon, 06/01/2020
Science and the humanities in the time of pandemic: better together
Flatland — Fri, 05/29/2020
Thinking about buying a backyard pool? Same.
RT @KatieConradKS : Humanities matter for all the crises we're facing. Honored to be part of the team who wrote this and the writers of the…
«»
Follow us on Twitter »
Why KU
Apply »
One of 34 U.S. public institutions in the prestigious Association of American Universities
44 nationally ranked graduate programs.
—U.S. News & World Report
Top 50 nationwide for size of library collection.
—ALA
5th nationwide for service to veterans —"Best for Vets: Colleges," Military Times