LAWRENCE — A paper appearing in Geophysical Research Letters uses machine learning to craft an improved model for understanding geothermal heat flux — heat emanating from the Earth’s interior — below the Greenland Ice Sheet. It’s a research approach new to glaciology that could lead to more accurate predictions for ice-mass loss and global sea-level rise.

Among the key findings: 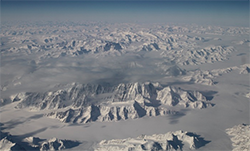 “Heat that comes up from the interior of the Earth contributes to the amount of melt on the bottom of the ice sheet — so it’s extremely important to understand the pattern of that heat and how it’s distributed at the bottom of the ice sheet,” said Soroush Rezvanbehbahani, a doctoral student in geology at the University of Kansas who spearheaded the research. “When we walk on a slope that’s wet, we’re more likely to slip. It’s the same idea with ice — when it isn’t frozen, it’s more likely to slide into the ocean. But we don’t have an easy way to measure geothermal heat flux except for extremely expensive field campaigns that drill through the ice sheet. Instead of expensive field surveys, we try to do this through statistical methods.”

Rezvanbehbahani and his colleagues have adopted machine learning — a type of artificial intelligence using statistical techniques and computer algorithms — to predict heat flux values that would be daunting to obtain in the same detail via conventional ice cores. 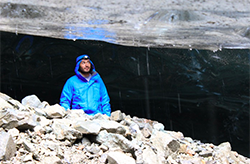 “We have a lot of data points from around the Earth — we know in certain parts of the world the crust is a certain thickness, composed of a specific kind of rock and located a known distance from a volcano — and we take those relationships and apply them to what we know about Greenland,” said co-author Leigh Stearns, associate professor of geology at KU.

“Most other models really only honor one particular data set,” Stearns said. “They look at geothermal heat flux through seismic signals or magnetic data in Greenland, but not crustal thickness or rock type or distance from a hot spot. But we know those are related to geothermal heat flux. We try to incorporate as many geologic data sets as we can rather than assuming one is the most important.”

The authors found the five most important geologic features in predicting geothermal flux values are topography, distance to young rifts, distance to trench, depth of lithosphere-asthenosphere boundary (layers of the Earth’s mantle) and depth to Mohorovičić discontinuity (the boundary between the crust and the mantle in the Earth). The researchers said their geothermal heat flux map of Greenland is expected to be within about 15 percent of true values.

“The most interesting finding is the sharp contrast between the south and the north of Greenland,” said Rezvanbehbahani. “We had little information in the south, but we had three or four more cores in the northern part of the ice sheet. Based on the southern core we thought this was a localized low heat-flux region — but our model shows that a much larger part of the southern ice sheet has low heat flux. By contrast, in the northern regions, we found large areas with high geothermal heat flux. This isn’t as surprising because we have one ice core with a very high reading. But the spatial pattern and how the heat flux is distributed, that a was a new finding. That’s not just one northern location with high heat flux, but a wide region.”

The investigators said their model would be made even more accurate as more information on Greenland is compiled in the research community.

“We give the slight disclaimer that this is just another model — it’s our best statistical model — but we have not reproduced reality,” said Stearns. “In Earth science and glaciology, we’re seeing an explosion of publicly available data. Machine learning technology that synthesizes this data and helps us learn from the whole range of data sensors is becoming increasingly important. It’s exciting to be at the forefront.”

KU in the news
PolitiFact — Thu, 05/19/2022
The US government is not creating food shortages, despite claim about buffalo killed in the 1800s
BBC — Wed, 05/18/2022
The endurance of Japan's simple street snack
RT @UnivOfKansas : Feeling lonely? Jeffrey Hall, a KU professor of communication studies, gives the New York Times his take on how many frie…
«»
Follow us on Twitter »
Why KU
Apply »
One of 34 U.S. public institutions in the prestigious Association of American Universities
44 nationally ranked graduate programs.
—U.S. News & World Report
Top 50 nationwide for size of library collection.
—ALA
5th nationwide for service to veterans —"Best for Vets: Colleges," Military Times