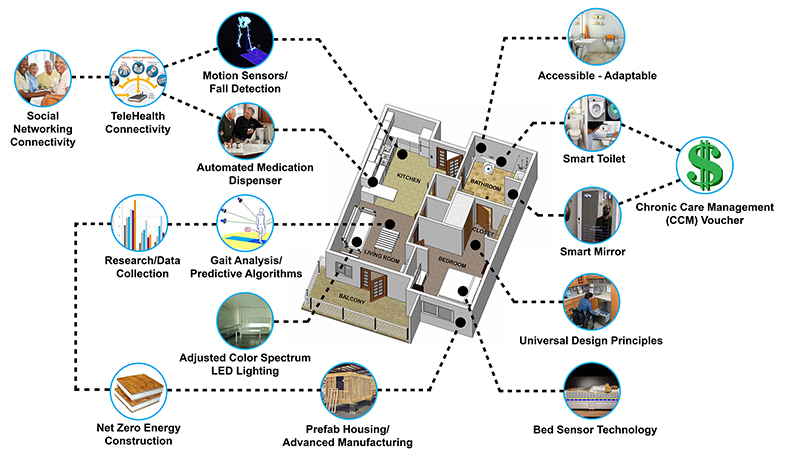 LAWRENCE — What if your house could help keep you healthy?

That’s the notion that University of Kansas School of Architecture, Design & Planning Associate Professor Joe Colistra and his students will explore this semester through a couple of grants that aim to incorporate big data and sensing technology into the warp and woof of homes of the future.

In October, the American Institute of Architects awarded Colistra a $30,000 Upjohn Research Initiative grant. In December, Colistra received word that Mozilla’s Gigabit Community Fund had given him an additional $21,000 grant. He is pooling those grant funds to build a housing unit – or at least part of one – that will feature embedded sensors to collect residents’ biometric data, with the goal of monitoring their health. The project will be executed by fifth-year students in the school’s East Hills Design-Build Center.

“With Kansas City having Google Fiber, you ask yourself: What would you do with unlimited bandwidth? So we proceed to the question of big data collected through the built environment,” Colistra said. “What if your house could capture your heel strike, the number of times you left your apartment, the number of times you go to the bathroom, how much sleep you got last night? The idea with connectivity and the Internet of Things is to link all that data together.”

Colistra explained that the idea of a floor that could monitor heel strikes “can tell if someone has fallen, if there is a stutter in their step that is a precursor of Alzheimer’s disease. These are not your normal sensors, but ones sensitive enough to use predictive algorithms on. They would be most useful to seniors, so we are working with scientists, including Jessie Huisinga at the Landon Center on Aging at the (University of Kansas) Medical Center, who work on Alzheimer’s disease. They can already do gait analysis with a device like a Fitbit, but this would be in the background. You would not have to turn it on. The monitor would be in the floor. It’s an accelerometer, linked to GPS. There could be smart mirrors, smart toilets …”

Smart mirrors, he explained, look for changes in the skin – moles, lesions, the effects of stroke. Smart toilets monitor hydration and evacuation.

“We are looking at the possibility of taking hydration readings that might lead to adjusting your diuretic or heart medication on the fly,” Colistra said. “It could revolutionize geriatric medicine. Your housing unit could be like a medical device; it takes care of you.”

Colistra said the project will be done with an eye toward creating a smart house with prefabricated components (e.g., walls, floor panels) so that such items become economically viable if implemented on a large scale.

Colistra said the project will be completed by the end of the school year – with as many rooms as the funding will allow. The results will then be displayed at conferences, including Maker Faire Kansas City June 24-25 at Union Station.

“It grows out of the New Cities research initiative,” Colistra said. “The question there is, ‘How do we make lifelong neighborhoods?’ That includes daycare, jobs, walkable streets, and, for seniors, rehab clinics and doctors.”

Colistra said working with health insurance companies on creating such dwellings would be ideal. They might be motivated to do so with the idea of bringing down their own costs, he said.

“It’s a possible new way to make smart cities,” Colistra said. “We know all this stuff is coming. The question is how to build architecture to use it. It’s all existing technology. It just hasn’t been put together yet.”