LAWRENCE — On a visit to the Kenneth Spencer Research Library at the University of Kansas, you would be hard-pressed to find someone who did not know the work and impact of Sandy Mason. 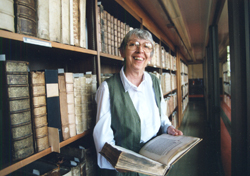 A distinguished librarian at KU from 1957 until she retired in 1999, Alexandra “Sandy” Mason was Spencer’s first librarian. She died in June 2011, leaving a $1.03 million estate gift to KU Endowment from her TIAA-CREF retirement account to benefit KU Libraries, and specifically, the Kenneth Spencer Research Library.

Her gift will establish the Ann Hyde Fellowship for Medieval and Early Modern British and European Manuscripts in honor of Mason’s lifetime friend, Ann Hyde, who died in June 2014. Hyde was manuscripts librarian at Spencer Research Library before she retired in 2000.

During Mason’s career at KU, she built special collections of research materials, guided generations of scholars and librarians, and was a leader in the Rare Books and Manuscripts section of the American Library Association. She received numerous professional awards, including the first Chancellor's Award for Distinguished Librarianship in recognition of her contributions to KU Libraries and her international leadership in rare book and special collections librarianship. In 1980, she was named to the KU Women’s Hall of Fame.

“Sandy believed viscerally in the importance of books and libraries, both the intellectual value of their content and cultural value of their physical selves,” said Bill Mitchell, a longtime friend and colleague of Mason. “I think Sandy wore a special kind of trifocals, for she seemed to be able to focus on the past, present and future.”

Beth Whittaker, KU Libraries assistant dean for distinguished collections and director of the Spencer Research Library, worked with Mason as a student assistant from 1992-1994 before joining the library in a professional capacity in 2009.

“Sandy was a pioneering scholar-librarian,” Whittaker said. “She played a significant role in building the renowned and rich collections within this library, and she encouraged me to become a librarian. It is an honor to accept this truly transformational gift.”

Prior to Mason’s retirement, an anonymous alumni couple established a scholarship fund named for her and Joseph Rubenstein. Rubenstein was the library’s head of Special Collections from 1953 to 1963. The scholarship provides support for KU students who intend to pursue a career in an academic or research library.

The estate gift counts toward Far Above: The Campaign for Kansas, the university’s comprehensive fundraising campaign. Far Above seeks support to educate future leaders, advance medicine, accelerate discovery and drive economic growth to seize the opportunities of the future.