LAWRENCE — A researcher at the University of Kansas is part of a team to uncover strong evidence of brood-care parenting strategy in 450-million-year-old crustaceans — the oldest verification of ovarian-to-juvenile brood care in the fossil record. 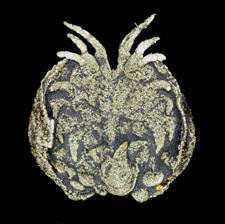 The new species of ostracod exhibiting brood care, which the team named Luprisca incuba, are held at Yale’s Peabody Museum of Natural History and were collected in central New York state.

“These are beautiful specimens,” said Úna Farrell, invertebrate paleontology collection manager at KU’s Biodiversity Institute. “Preservation of delicate soft parts, like the limbs and eggs in these specimens, only occurs in exceptional circumstances. Usually, only the more robust outer ‘shell’ survives in the rock record. These fossils allow us a glimpse of life on the ocean floor at a time in Earth’s history when N.Y. state was partially under water and south of the equator.”

The research team, headed by Professor David Siveter of the University of Leicester, has termed their find a “nursery in the sea” because the fossilized scene reveals a mother actually carrying her eggs and offspring.

“Some kinds of ostracod lay their eggs into the ocean and hope for the best, but this particular group take care of their young by brooding the embryos under the protection of their shell,” said Farrell. “This specimen has multiple eggs within its shell and even some newly hatched individuals, which are already equipped with a shell of their own.”

The ancient ostracods are relatives of a group alive today that exhibit similar brood-care strategies, indicating that it was effective for millions of years.

“Ostracods are crustaceans, like shrimp, lobster and crabs, and they are very common today — tens of thousands of species of ostracod live in modern oceans, lakes and rivers,” said Farrell. “The modern relatives of Luprisca also take care of their young by brooding, indicating that it was clearly a successful mode of life.”

The team’s findings recently appeared in the peer-reviewed journal Current Biology. Farrell said the fossil discovery is significant because it pushes back the first instance of brood-based parenting known anywhere on the planet.

Farrell’s contribution to the work involved excavating some of the delicate fossils, along with co-author Markus Martin, from rocks of Ordovician age from upstate New York.

“I spent several summers collecting fossils and measuring rock sections at Beecher’s Trilobite Bed site,” she said. “The site has been known for its exceptionally preserved fossils since the late 1800s. The fossils are preserved in pyrite, or ‘fool’s gold,’ which gives them their striking color.”

Farrell also was involved in CT scanning of the fossils at the American Museum of Natural History in New York City.

“The pyrite contrasts nicely with the surrounding shale so that the fossils show up very well in an X-ray,” she said. “A CT scanner takes several X-rays in very thin slices through the fossil, which can then be assembled into a three-dimensional model.”

Farrell said the researchers were able to pin down the age range of the fossils because the ages of rocks in the area are known through isotopic dating and by correlating the fossils with others in the beds. Indeed, part of the difficulty was finding the fossils at the outset.

“These fossils are tiny, around one to two millimeters, so spotting them in the first place is a challenge,” said Farrell.