LAWRENCE — In his play “Soul Gone Home,” published in 1937, Langston Hughes includes a powerful scene where a man who died at a young age rises up out of his casket and begins to criticize his mother for the lack of care she gave him. She tries to explain to him she did the best she could possibly do.

Two Kansas scholars say they have found a new window into how Hughes, the unofficial black poet laureate, used his real-life relationship with his mother, Carrie, to create that emotional scene and others in his early years as a writer.

“It’s more than just coincidence. It actually seems as though Hughes is fervently trying to work out the nature of his family relationship,” said John Edgar Tidwell, a University of Kansas professor of English. 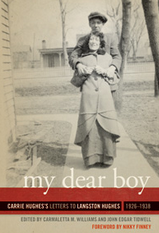 The previously unexamined letters came from the Langston Hughes Papers at the Beinecke Rare Book & Manuscript Library at Yale University. Tidwell said there is no cumulative file of Hughes’ responses in kind to his mother.

“In the absence of return letters, our task was to see whether we could determine how he may have responded to her,” Tidwell said. “What we discovered was not only a response to her, but his way of working through a complicated family relationship.”

Fortuitously, both Hugheses were born in February, now widely celebrated as Black History Month. Carrie was born just outside of Lawrence on Feb. 22, 1873, and Langston spent much of his childhood in the city. During the week of Feb. 1, 2002, KU celebrated the centenary of Langston’s birth with “Let America Be America Again: An International Symposium of the Art, Life, and Legacy of Langston Hughes.”

“My Dear Boy” provides insight into what scholars commonly agree as Hughes’ practice of lowering a self-protective veil over his personal life, Tidwell said.

“We know, for example, that despite being a truly gregarious person, Hughes was quite reticent when it came to revealing personal matters,” he said. “He always reached a point where he would begin to shut down and become emotionally unrevealing.”

Hughes had a complex relationship with his parents, even to the point where a conflict between becoming a writer and an everyday working man created a major tension in his life. Hughes’ first novel, “Not without Laughter,” makes use of the tension over money and other family issues found in Carrie Hughes’ letters. The mother character Annjee Rodgers declares that her teenage son Sandy, having reached the age of 16 years, is now old enough to help her by earning money.

“This example helps to affirm our argument that instead of writing her letters to express his anger and disappointment,” Tidwell said, “this and other pieces show him working out his own frustration with his mother via art.”

The project also sheds light on Carrie Hughes, who in most scholarship about Langston Hughes, is only referred to as his mother or in a narrow view as a “self-centered and money-grubbing woman,” Tidwell said. The book likely doesn’t redeem her image, but the letters do provide a broader perspective about how her life was filled with struggles and the many efforts she made to control it, he said.

Ultimately, looking at Hughes’ relationship with his mother and how he responded is important to understanding the man who weathered family pressures to become one of the leaders of African-American art from the Harlem Renaissance to his death in 1967, Tidwell said. He added that in perhaps another kind of artistic response related to how scholars study him, much can be gleaned from one of Hughes’ favorite songs played at his funeral: Duke Ellington’s “Do Nothin' ‘Til You Hear from Me.”

“A number of people have used Hughes’s art as an interpretative pathway into the mysteries of his life but without waiting on him to give them the clues necessary for informed analyses,” Tidwell said. “We hope ‘My Dear Boy’ offers new insight into his work and into the influence expressed by his relationship with a self-focused mother, who inspired it.”