LAWRENCE — “Driving While Black” is not a crime, but a University of Kansas research team has found that race plays a major role in determining whom officers pull over for investigatory vehicle stops.

Police disproportionately stop black and minority drivers to check for possible criminal activity, even when there is no evidence of it. They use minor traffic violations, like driving two miles over the speed limit, as a pretext for making these stops. This practice has eroded the black community’s trust in the police and negatively affected how minorities participate in civic life, according to the study, which included interviews with 2,329 drivers in the Kansas City metropolitan area who were pulled over in the past year.

“If you and your friends and family are commonly subject to a stop and asked, ‘Where are you going? Do you own this car?,’ you get the sense that you are not really being treated as an equal member of society, and it’s a very demeaning experience,” said Charles Epp, professor in the School of Public Affairs and Administration.

Talking with drivers yielded many new findings in comparison to past studies that relied on traffic tickets for data, the researchers said, allowing them to see more clearly the source of racial disparities in police stops and hear how people think and feel about being stopped.

“The imperative for change results in the fact that the police in doing their job in protecting the community are actually hindered by this process in the sense that citizens aren’t willing to contact police or share information with people because they don’t trust them,” said Don Haider-Markel, professor of political science. “They are actually in a broader way less able to do their jobs.”

Epp, Haider-Markel and Professor Steven Maynard-Moody, also of the School of Public Affairs and Administration, published their findings of research funded by the National Science Foundation in the book “Pulled Over: How Police Stops Define Race and Citizenship.”

The group said that looking at traffic safety stops versus investigatory stops led to key findings compared with past research. In a traffic safety stop, an officer pulls over someone to sanction the driver for violating a traffic law, such as speeding or running a stop sign. In these stops race was no factor, Epp said. In an investigatory stop an officer stops a driver to check out the driver for possible criminal activity. In these stops blacks were stopped at nearly three times the rate of whites. 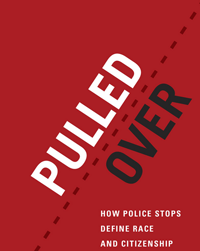 The research team distinguished the two types by the justification for the stop. Traffic-safety stops were made for significant violations, like speeding 10 or 15 miles over the limit. Investigatory stops were made for minor violations. These included failure to signal a lane change for the required period of time, driving just a little over the speed limit, or a burned-out license-plate light.

In investigatory stops black drivers, particularly young men, were pulled over at a much higher rate. For example, a black man 25 or younger had a 28 percent chance of being stopped by police for investigatory reasons over the course of one year, while for white people in that same age range, it was 12.5 percent for men and 7 percent for women.

Haider-Markel said in addition to separating traffic-safety stops from investigatory stops, the team made sure the disparities they found by race weren’t a result of other nonracial factors by accounting for a variety of other possible explanations for who is stopped, including driving behavior, how often a person drives, types of vehicles and vehicle customization.

“We have a variety of controls for alternative explanations,” he said.

The group said the finding about race being a major factor in investigatory stops is important because police departments widely use these stops to try to catch criminals. However, research has shown these stops yield a low percentage of “hits” where police uncover actual criminal activity.

“The justification for investigatory stops is that you have to pull over a lot to get one, but this means that officers end up violating the rights and personhood of lots of innocent people to just find one instance of a violation of the law,” Maynard-Moody said. “That’s a big part of where all this negative comes out.”

The interviews the team conducted with drivers who were pulled over revealed that the investigatory stop itself is harmful. It affects how these drivers – particularly minorities – perceive police, regardless of how politely officers treat them during the stop.

This can spill over to other aspects of civic life because the interviews revealed investigatory stops influence how black people approach even going into a public space or building.

The research team concludes the main problem has arisen out of police leaders celebrating the effectiveness of the investigatory stops that rarely produce the intended result. Because Supreme Court precedent has largely upheld investigatory stops, they recommend changes in both policy and law enforcement practices.

“The solution is going to have to come at least in part from police leaders saying: 'Don’t do these things. They cause harm. Every time you do it, it causes harm and yields precious little in the way of contraband or guns or information,'” Epp said. “So it’s a palpable harm to the people who are stopped, and it also harms police departments’ efforts to earn the community’s trust and cooperation.”

For example, some agencies have had success requiring officers to seek permission from a supervisor to conduct a search because it institutes more accountability.

“If you change norms that guide police discretion, you can make some changes to police practices,” Maynard-Moody said.

Law enforcement departments have made progress in several other areas surrounding race in the past 30 years. Maynard-Moody said the group hoped police agencies would be able to use the study to become more aware of how official encouragement of investigatory stops leads to racial disparities in who is stopped and to use this information to change their practices.

The study included examining records and interviewing drivers and police in six counties in the Kansas City area, which included 44 different cities in Kansas and Missouri. Epp said they chose a large geographic area that included a variety of demographic populations and factors because they were aiming for a sample that matches most metropolitan areas in the country.

The University of Chicago Press will release the book in April as part of its Chicago Series in Law and Society.