The 2 p.m. event culminated in a ceremonial bell ringing atop a reproduction of the iconic New York Stock Exchange balcony, where KU leaders and major donors joined the governor. 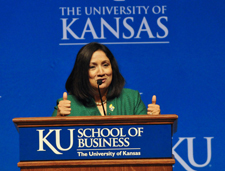 “It is truly a great day to be a Jayhawk,” said Dean Neeli Bendapudi, who spoke at the ceremony, along with KU Chancellor Bernadette Gray-Little. “It was my mission, in returning to KU, to bring this new building project to reality. We gather today because of the truly moving support of our alumni and friends, our benefactors who made this happen.”

The building — which is currently planned to be a six-story, 166,000-square-foot structure — will be located on the east side of Naismith Drive, across from Allen Fieldhouse at the south entrance of campus. The project is expected to be completed for the 2015-2016 academic year, KU’s sesquicentennial. 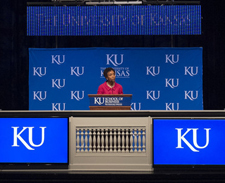 “Today, we celebrate a new building that will position KU to compete with any business school facility in the world,” said Chancellor Gray-Little. “Once complete, this building will be a tremendous asset for the university — and the entire state of Kansas.”

The new School of Business building will be the largest academic facility ever erected at KU entirely through private support. To date, donors have contributed about $48 million in gifts and pledges of the $55.7 million fundraising goal for construction of the building, including a lead gift of $20 million from the Capitol Federal Foundation of Topeka. KU is providing $10 million for infrastructure costs such as site preparation. 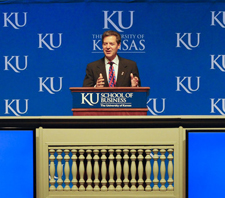 “This new facility will have a lasting impact on the state’s economy, as KU and its business school play a vital role in preparing and educating future Kansas business leaders,” said Gov. Brownback. “The new building reinforces my vision of driving economic growth in Kansas through entrepreneurship and innovation — and this new building will give KU’s business programs the resources to do so.”

The Chicago office of Gensler, a global architecture firm, will serve as lead designer of the new building, with Kansas City-based Gastinger Walker Harden + BeeTriplett Buck and its local partner. JE Dunn Construction has been hired as the project’s general contractor.

Construction is set to begin within the next few days. KU will relocate tennis courts, beach volleyball courts and an activity field, which currently rest on the new building’s future site, to the open space between Robinson Center and Watkins Memorial Health Center.

“Whether you gave $20 or $20 million, the School of Business is humbled by your support,” Bendapudi said. “This new building will inspire collaboration of all kinds, and will allow us to attract top students and faculty for many years to come.”

“We are grateful to all the donors who have generously contributed to this project, which will be one of the milestone accomplishments of Far Above: The Campaign for Kansas,” said Dale Seuferling, president of KU Endowment. Far Above is a $1.2 billion comprehensive campaign for the university. The campaign seeks support to educate future leaders, advance medicine, accelerate discovery and drive economic growth to seize the opportunities of the future.

RT @UnivOfKansas : "We stand with you and for you." Read the statement from Chancellor Douglas A. Girod and Provost Barbara Bichelmeyer as…
«»
Follow us on Twitter »
Why KU
Apply »
One of 34 U.S. public institutions in the prestigious Association of American Universities
44 nationally ranked graduate programs.
—U.S. News & World Report
Top 50 nationwide for size of library collection.
—ALA
5th nationwide for service to veterans —"Best for Vets: Colleges," Military Times