LAWRENCE — A team of eight University of Kansas School of Engineering students received national recognition for its meticulous design of a reusable space launch vehicle.

Team “KU SpaceHawks” earned second place in the American Institute of Aeronautics and Astronautics (AIAA) Foundation’s prestigious Undergraduate Team Space Transportation Design Competition. Teams were challenged to design a launch vehicle with as many reusable components as possible with capabilities of transporting a payload of 10,000 to 20,000 pounds into low Earth orbit.

“A vast majority of our design is reusable, practically everything except our solid rocket boosters. We studied creating an entirely reusable system, and it just wasn’t cost-effective, and there were some doubts about long-term safety,” Hofmeier said. “We also tried to take into account future technological developments that could enable a 100 percent reusable design down the road.” 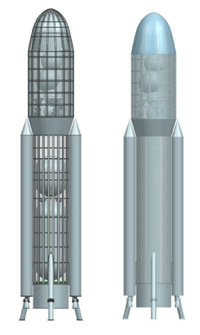 The team of 2013 graduates – composed of four aerospace engineering students and four majoring in engineering physics – developed the project in the spring 2013 semester as part of a senior capstone design course that focused on spacecraft design. Mark Ewing, associate professor of aerospace engineering, served as the team’s adviser.

From computer modeling, fuel estimates, structural analysis and developing a business plan, each member focused on a different aspect of the project.

“I think the detail behind the project made it stand out. While it wasn’t the most original of designs, the effort we put into each portion of the project was evident in the final design,” Hofmeier said.

KU designed its spacecraft with a goal of reaching a space station in low Earth orbit. Competition guidelines did not specify what the craft would transport, but Hofmeier said the team drew up a plan that could potentially make a manned mission to Mars more attainable.

“We designed it to carry hydrogen and oxygen. We thought if we could store those gases there and have it orbit Earth, it could become a refueling station of sorts, possibly for a mission to Mars,” Hofmeier said. “Since a spacecraft burns through the most fuel just getting out of Earth’s orbit, if those fuels were already stationed up there, it could make long-range, manned space travel more feasible.”