LAWRENCE — Two graduate students in the University of Kansas School of the Arts have won major national scholarships for jewelry design. Only 11 students nationwide received awards from the organization.

Eunhwa Son and Sunyoung Cheong received scholarships from the Women’s Jewelry Association in the Designer/Creator category. WJA awards the scholarships in this category based on finished pieces designed and created by the student. 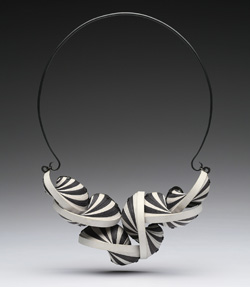 Son, a second-year graduate student from Daegu, South Korea, won the Myra Goldstein Award of $4,250, the second-highest award in the category. She said two of her three pieces were inspired by alternate ways of using materials not traditionally associated with jewelry. Son said she used paper as her base for those two pieces because it is a more accessible and lightweight material. For her third piece, she used fine silver.

“Through experimentation, I continually try to discover logical constructions and forms inspired by rhythms, motions, accumulations and structures that exist in nature and my surroundings,” Son said. 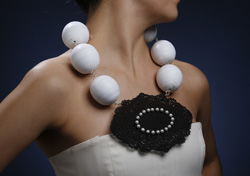 “We [at KU] teach the traditional skill with the very advanced technology, too,” Cheong said.

Both Cheong and Son have previously won awards from WJA and credited their education and professors in the School of the Arts for their success. Cheong said KU graduate students receive scholarships from WJA almost every year.

Son and Cheong both plan to enter the professional realm of the jewelry field after completing their degrees.

The metalsmithing and jewelry program is in the Department of Visual Art, one of four departments in the School of the Arts. As part of the KU College of Liberal Arts and Sciences, the School of the Arts offers fresh possibilities for collaboration between the arts and the humanities, sciences, social sciences, international and interdisciplinary studies.