LAWRENCE — A solid design and strong performance across the board earned the University of Kansas School of Engineering Formula car team a top five finish at a recent international student design competition. 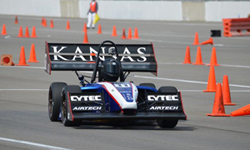 The Jayhawk Motorsports team claimed fourth place overall in the combustion engine car competition, beating all other Kansas and Big 12 schools at Formula SAE Lincoln, held June 19-22 in Lincoln, Neb.  The Formula SAE competitions challenge student teams to design, build, then race an open-wheel, Formula-style car. The teams and their entries must undergo a series of judged technical evaluations, presentations and racing events.

“The judges liked that we had a lot of depth on the team. We had people who could step in and cover for the ones that could not make it to the competition,” said Jordan Faltermeier, a senior in mechanical engineering from Shawnee and the team’s manufacturing leader. “They also liked the in-depth programs we developed to analyze our chassis systems and simulate lap time and competition points.”

KU finished second in the vehicle design portion and sixth in the endurance event, which tests how the car handles for 19 laps on a racetrack. This year’s event drew teams from the United States, Canada, Mexico, India, Japan and Brazil. KU was also one of five teams to participate in the Electric Vehicle competition at Formula SAE Lincoln, though technical problems kept the team from completing all the competition requirements.

“I think we took on a lot of work this year by choosing to make two cars from complete scratch,” Faltermeier said. “We were able to perform very well at competition even though we had more work throughout the year. I am very proud of our fourth-place finish and all the work and time our team put in to the cars.”

This marks a second-straight year for a top-five finish at Formula SAE Lincoln (the KU team took home the championship in 2012), and the focus is already shifting to what figures to be another strong campaign in 2014.

“We won’t need big changes,” said Robb Sorem, associate professor of mechanical engineering and Jayhawk Motorsports faculty adviser. “This year’s car was the best analyzed ever — we will add ‘best-tested’ to next year’s car.”

The Jayhawk Motorsports team also had the honor to leave part of its winning legacy in Lincoln. The Smith Collection Museum of American Speed, which showcases dozens of show and race vehicles ranging from the 1910s to the present, will display the 2012 Jayhawk Motorsports championship vehicle for the next three years.

“For anyone who is into racing or engines, this is one of the top museums in the country,” Sorem said. “Plus, it’s a great way to get KU out there.  Anyone visiting can’t help but notice the big KANSAS on the rear wing.”