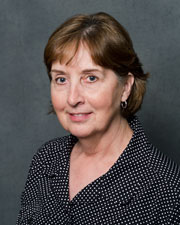 LAWRENCE — Rape is a crime that makes headlines yet may fail to elicit the kind of meaningful conversations that should follow. A University of Kansas journalism professor has published a study showing that media coverage of the Duke lacrosse team rape case is a prominent example of missed opportunities in the wake of a salacious story.

Barbara Barnett, associate professor of journalism and associate dean of undergraduate studies at the William Allen White School of Journalism and Mass Communications, has published an analysis of coverage of the case in the journal Women and Language. In the study, Barnett analyzed coverage from four news outlets: The New York Times, The Washington Post, The Durham (N.C.) Herald-Sun and The Raleigh (N.C.) News & Observer. The former two were selected for their national reach, while the latter were located in the home counties of the subjects involved in the case.

Barnett was drawn to the case largely because her research specialty focuses on women and violence and how it is portrayed in the media.

"I just thought, 'Why is this case so fascinating?'" Barnett said of the incident and its intense coverage. "But I also wanted to find out 'what are the media actually reporting?' Even at the time of the case, there was no coverage of rape. It's a very difficult case to cover."

News coverage in the immediate wake of the incident framed three members of Duke's lacrosse team as overprivileged, rich, rowdy criminals who were finally being held responsible for their actions. The accuser, a young African-American woman who was a student at nearby North Carolina Central University, was portrayed as a working mother subjected to a horrible crime. Mike Nifong, the district attorney who brought rape charges against the players, portrayed himself as a crusader against social wrongs, intent on bringing the lacrosse team and its culture of entitlement to justice, and media were more than happy to play along, Barnett said.

Eventually the accuser's claims were shown to be false, and the narrative shifted. The accuser was labeled a drinking, promiscuous stripper who put herself at risk, while players were later represented as misunderstood victims. When Nifong eventually resigned, coverage cast him as the problem behind the entire case and his removal as the solution.

Analysis of the four outlets' coverage of the case showed a surprising lack of analysis about sexual assault, Barnett said, but included stories about the players' neighbors complaining about their loud parties and comments from bar patrons, but not from battered women's shelters or similar services. The accuser was purported to have substance abuse and mental health problems, but those topics were not addressed in meaningful ways either.

"It didn't become a story about rape. It became about a rogue prosecutor and the accused and vindication. It was simply victims, villains and vindication," Barnett said. "There wasn't an exploration of why this would happen or if substance abuse or mental illness can lead to exploitation in the justice system."

Coverage focus then turned to matters such as the health of the sport of lacrosse in the wake of the allegations, while issues such as potential changes in policy at Duke, the effect of the case on North Carolina Central — a historically black university — alcohol and sex on college campuses and whether such incidents would discourage women from reporting sexual abuse were largely ignored, Barnett said. Legitimate yet difficult issues such as gender roles, racial stereotypes and sexual exploitation were also left uncovered.

Just one Durham Herald-Sun article pointed out that the Duke case was one of 100 rapes reported to Durham police in 2006, and of those, only one resulted in a conviction. Yet there were no articles examining why 99 of 100 reported rapes did not result in a conviction.

"The issues of false rape, rape and sexual violence were lost as journalists focused on the welfare of the players, the university, the city and the political system," Barnett wrote. "The impact of the case on women, specifically women who might be weighing the consequences of reporting rape, vanished among stories that highlighted the effects of the case on powerful individuals and powerful institutions."

The case can be a valuable teaching moment, both for working and aspiring journalists, Barnett said.

"If the media are our teachers and advocates for society, I don't think we learned very much in this case," she said. "I think one of the lessons for the press is 'sometimes on a good story you need to wait and let the facts come forward.' I'm not saying media are the bad guys, they got the story, but there were just so many issues that could have been raised."

RT @UnivOfKansas : Is there a link between how life evolved and our own economic processes? In his new book, a KU professor examines how evo…
«»
Follow us on Twitter »
Why KU
Apply »
One of 34 U.S. public institutions in the prestigious Association of American Universities
44 nationally ranked graduate programs.
—U.S. News & World Report
Top 50 nationwide for size of library collection.
—ALA
5th nationwide for service to veterans —"Best for Vets: Colleges," Military Times