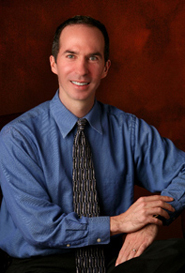 LAWRENCE — Roughly 30 percent of the U.S. adult population reports having some symptoms of depression that regularly arise in the winter. Stephen Ilardi, associate professor of psychology at the University of Kansas, offers hope for sufferers of seasonal affective disorder and other forms of depression during "Banish the Blues," a timely presentation at 6 p.m. Dec. 5 in Marvin Auditorium at the Topeka and Shawnee County Public Library.

Ilardi promises to deliver an engaging, interactive presentation about something that affects all of us. "At least 1 in 4 people will experience a depressive illness, and almost every person is impacted by it somehow," he said.

He'll also address his findings that humans were never meant for the modern pace of life, which can be both sedentary and frenzied, sleep-deprived and fast food-laden.

Ilardi wrote "The Depression Cure: The 6-Step Program to Beat Depression Without Drugs." In it, Ilardi writes about his research and the benefits of the program he developed, called Therapeutic Lifestyle Change, which includes healthy sleeping habits, physical activity, dietary changes and increased social connection.

"The use of medication to treat depression has more than tripled in the last two decades, but depression has continued. Prescriptions have helped millions, but the help is often short-lived, and we need to validate the experience of the 50 percent who tried them and it did not help them at all," he said.

Learn more about seasonal affective disorder and other depressive illness at his talk. A Q&A will follow, so bring your questions.

Ilardi's research career has been focused on investigating the phenomenology and the successful treatment of depression. He is the author of more than 40 professional articles on mental illness. Through his active clinical practice, he has treated several hundred depressed patients.

"Banish the Blues" is part of the CLAS Acts lecture series sponsored by the College of Liberal Arts and Sciences, which aims to take KU research off campus and into the community. Ilardi is a faculty member in the College. The event is co-sponsored by the Topeka and Shawnee County Public Library.

KU's College of Liberal Arts and Sciences offers dozens of diverse majors in natural sciences and mathematics, social and behavioral sciences, humanities, international and interdisciplinary studies, and the arts. More than 60 percent of KU students are enrolled in a major in the College, making it the largest academic unit on campus.