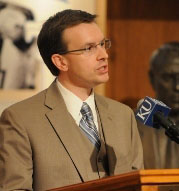 The award, coordinated by the Office of International Programs, was endowed by the late George Woodyard, the first dean of international studies, and his wife, Eleanor. It recognizes faculty on the Lawrence campus who have demonstrated outstanding leadership in strengthening the University of Kansas' international dimension in such areas as curriculum development, study abroad programs, relationships with international partner institutions and collaboration with international colleagues in significant research and publications.

Herron joined the Department of Political Science in 2001 with a doctoral degree from Michigan State University. Currently he is on leave serving as a program director at the National Science Foundation. His nomination materials recognized his research and teaching, mostly on the states of the former Soviet Union and Eastern Europe. His extensive contributions to international education at KU include serving as director of the Center for Russian, East European and Eurasian Studies, bringing international scholars to campus, program development and managing a U.S. State Department grant to develop videoconferencing courses with partner institutions in the post-Soviet region. He has received a Fulbright fellowship, lectured at universities in Eastern Europe and served as an international election observer in seven countries.

"This was another highly competitive year for this prestigious award. Professor Herron's tireless commitments to furthering international education stood out to the review committee as being worthy of this year's Woodyard International Educator Award," said Brent Steele, director of faculty programs for International Programs.