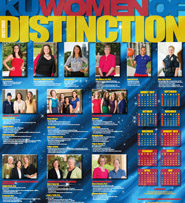 LAWRENCE – Twenty-four current students, faculty members and KU alumnae are among this year's honorees in the 2012-13 KU Women of Distinction calendar. The annual calendar recognizes women across the KU community for outstanding achievements.

Among the 15 current students and recent graduates, four are recognized for individual achievements, and 11 are recognized among group accomplishments, including advocating for international students and cultures, advancing student achievement, building communities, breaking barriers in STEM fields and leading by example.

Those featured on the 2012-13 Women of Distinction calendar are listed below.

Jamie Branch, from Topeka, is a KU senior majoring in mechanical engineering. She is a Madison and Lila Self Engineering Leadership Fellow, presented at the 2011 Harvard Research Experience for Undergraduates on soft robotics, and helps those with physical and cognitive impairments as a Special Olympics coach.

Charity Phillips Lander, from Corpus Christi, Texas, is a graduate student in geology, emphasis on biogeochemistry. In 2010, she was a nominee for Military Spouse of the Year by the U.S. Navy. She is president of the KU American Association of Petroleum Geologists student chapter and chair of the Geological Society of America professional development committee.

Kelsey Murrell, from Overland Park, earned her Bachelor of Arts in English in 2012. Last spring, she became the 26th KU student to be named a Rhodes Scholar. She was a 2011-12 Hall Center Scholar and received a KU Undergraduate Research Award in 2011.

Angel Goodrich, from Tahlequah, Okla., is a senior majoring in applied behavioral science and a three-year starter on the women's basketball team. Last season she was a finalist for the Nancy Lieberman Award and led the team as it advanced to the Sweet 16 in the NCAA tournament. She has overcome two major knee injuries during her time at KU.

Students and recent alumnae honored as part of a group:

Rhianna Patrinely, from Mayetta, earned her Bachelor of Arts in Russian in 2012 and is a second lieutenant in the US Air Force. Patrinely is featured on the calendar in the Leading by Example category. She graduated with highest distinction in May 2012 as a member of the KU Honors Program. She was named a 2012 Distinguished Graduate by the KU Air Force ROTC.

Danielle Onions, from Shawnee, is a senior in political science and women, gender & sexuality studies. Danielle is featured on the calendar in the Leading by Example category. She was named an Outstanding Woman in Community Service by KU in 2012 and awarded the Elizabeth and Carl Gustafson Scholarship for outstanding undergraduates in political science in 2011. Last spring she served as an intern in the office of U.S. Sen. Jerry Moran.

Taylor Anne Haun, from Olathe, earned her Bachelor of Social Work from KU in 2012 and is currently a graduate student in the School of Social Welfare. Taylor is featured on the calendar in the Leading by Example category. In 2011, she received an Undergraduate Research Award from the KU Honors Program. She is a KU Multicultural Scholar in Social Work. She is a member of the Douglas County AIDS Project board of directors and the Sigma Alpha Lambda national leadership and honors organization.

Megan Watson, from Overland Park, is a senior majoring in chemistry and English. Watson is featured on the calendar in the breaking barriers in STEM fields category. She serves as executive director of the KU Dance Marathon. In 2010 she was the Owen Maloney award recipient and in 2012 the Walter Gubar award recipient from the chemistry department.

Nikki Galvis, from Memphis, Tenn., is a graduate student in bioengineering. Galvis is featured on the calendar in the breaking barriers in STEM fields category. She has been awarded the prestigious NSF Graduate Fellowship and the Self Graduate Fellowship. She works on a research project in the Spine Biomechanics Laboratory in Mechanical Engineering related to treatment of scoliosis, a condition that predominately affects females. In addition, Nikki also mentors undergraduate women in her laboratory.

Emily Dellwig, from Overland Park, is an assistant electrical engineer in the Nuclear Energy Group, Burns & McDonnell, and earned her Bachelor of Science in electrical engineering from KU in 2012. Dellwig is featured on the calendar in the breaking barriers in STEM fields category. She was a team leader for the Jayhawk Motorsports Electric Car, which won first place at the Formula Hybrid Competition in May 2012. In spring 2012 she became a Fulbright Scholar from the University of Stuttgart. Dellwig was also awarded an Anita Borg Google Memorial Scholar in 2011.

Kait Perry, from Auburn, is a senior studying neurobiology and biology. Perry is featured on the calendar in the building communities category. She was the recruitment coordinator for The Big Event in 2011-2012. She won the Robert E. Hemenway Award for Public and Civic Service in 2012. She was also an Outstanding Student Senator from 2011-2012 and is a Senior Senator for the 2012-2013 year.

Haley Miller, from Kingman, is a senior studying women's studies, English and Judaic studies. Miller is featured on the calendar in the building communities category. She is the 2012 KU Commission on the Status of Women president. She was awarded the Foreign Language and Area Studies Award in Hebrew and Israeli studies for 2011-2012. Miller is also a chairperson on the Multicultural Affairs Committee.

Alexandra Rose, Topeka, is a senior majoring in political science and minoring in conflict studies. Rose is featured on the calendar in the building communities category. From 2010-2012 she served on the Alpha Delta Pi Executive Board. In 2012, she was named an Outstanding Woman in a Sorority. She is also a Truman Foundation Scholarship finalist.

Paige Blevins, Great Bend, is currently a student in the KU School of Law. She earned her Bachelor of Arts in English in 2012 from KU. Blevins is featured on the calendar in the building communities category. She was president of the Student Alumni Research Board in 2010, as well as the vice president of the Dennis E. Rieger Scholarship Hall from 2009-2012. Blevins received a Chancellor's Student Award in 2012 and the Alexis F. Dillard Student Involvement Award.

Sarah Stern, from Lawrence, is a senior majoring in Latin American studies and journalism. Stern is featured on the calendar in the advocating for international students and cultures category. She is a KU Global Scholar and was named a Glamour Magazine Top Ten College Woman of 2012. Sarah has also been recognized for her international photography.

Faculty, staff, and alumnae being honored:

Rita Clifford, registered nurse, doctorate, is associate dean for community engagement at the KU School of Nursing. She is among the individuals honored on the calendar. Clifford is a 1992 recipient of the Distinguished Alumni of the University of Kansas Nurses Alumni Association and a 2007 Honorary Recognition recipient from the Kansas State Nurses Association, that organization's highest honor.

Margaret Bayer is professor and associate chair in the KU math department. She is featured on the calendar in the accomplished faculty category. Bayer is a 1998 recipient of the Outstanding Woman Educator award, a past Sigma Xi Distinguished Lecturer and is book review editor for the Association for Women in Mathematics newsletter.

Mary Banwart is an associate professor of communication studies and earned her Bachelor of Arts from KU in 1990. She is featured on the calendar in the accomplished faculty category. Banwart is a 2008 Kemper Award winner. She is advisory board chair and coordinator for the KU Leadership Studies minor and the principal investigator and academic director for the U.S. State Department grant, U.S. Women's Leadership Institute: Women's Civic Leadership from the Heartland.

Hodgie Bricke retired in June 2012 as assistant vice provost for international programs and earned her doctorate from KU in 1972. She is featured on the calendar in the advocating for international students and cultures category. From 1996 to 2011, she advised 70 faculty and 106 students with successful Fulbright applications. She is a 2006 recipient of the Outstanding Woman Administrator award. In 2004, she served as committee chair of the Global Awareness Program.

Ji-Yeon Lee is a lecturer in East Asian languages and cultures. She is featured on the calendar in the advocating for international students and cultures category. Since 2008, she has served as director of the Lawrence Korean School. Lee earned her doctorate and pursued multiple master's degrees while teaching courses in Korean and raising three children. She is a past president of the Stouffer Neighborhood Association.

Jane Tuttle is assistant vice provost for student affairs and earned her education doctorate from KU in 1988. She is featured on the calendar in the advancing student achievement category. Tuttle has served as treasurer of the Association for Student Conduct Administration and as chair of the La Leche League International Board of Directors. She is a recipient of the Buffalo State College Outstanding Alumna for the Student Personnel Administration Graduate Program.

Lynn Villafuerte is the program coordinator for the Initiative for Maximizing Student Development and Post-Baccalaureate Research Education Program, in the Office for Diversity in Science Training. Villafuerte is featured on the calendar in the breaking barriers in STEM fields category. She is a 2011-2012 KU Staff Fellow, member of the Friends of the Lied board and is active in the Peer-Led Undergraduate Supplement Program.

Calendars are available in the Student Involvement and Leadership Center, Kansas Union Room 400; the KU Bookstores (including Edwards and KU Medical Center) and a variety of other locations on campus.