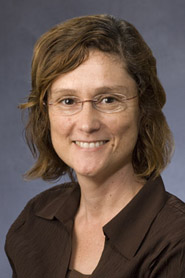 More Information
LAWRENCE – The moderation in religion trend among today's Muslim Brotherhood in Egypt reflects the teachings of a near iconic Egyptian scholar preacher who once told former President Hosni El Sayed Mubarak that rulers could be overthrown through the will of God by the people, according to a University of Kansas researcher.

Jacquelene Brinton, KU assistant professor of religious studies specializing in contemporary Islam and the use of media in religion, is writing a book about that scholar preacher, Sheik Metwali el-Sharawi (1911-1998).

Her research explores el-Sharawi's wide-ranging influence on Egyptian culture, on contemporary Islam and on the Arab world as well as the role of television in popularizing a religious scholar and spreading a message of moderate Islam. She also addresses how Egypt's modern religious scholars successfully preach Islamic renewal, the centuries-old tradition of reviving belief and practice, through their interpretation of the Quran.

El-Sharawi became one of the first Muslim preachers in the Arab world to preach sermons on television in 1980. He began preaching moderate religious messages on state-owned television at the request of Egypt's President Anwar Sadat, who was seeking to calm Islamic rhetoric and related violence. Sadat was assassinated by extremists the following year.

The weekly TV sermons, however, continued every Friday following communal prayers until shortly before el-Sharawi's death at age 87 in 1998.

He was not only expert in interpreting the Quran for modern times but also had a charismatic delivery and communication style that made him a media celebrity, Brinton explained. He was known as the people's preacher capable of communicating complex ideas in simple language.

"He saw television as an opportunity both to teach correct religious information to a mass audience and to rebuild respect for the authority of the ulama (religious scholars) in Egypt," Brinton said.

Unlike most Muslim Brotherhood members, the ulama are trained in Islamic traditions (hadith) and law at Cairo's Al-Azhar University, the world's second-oldest university and premier seminary for Sunni Muslims. Although the ulama have authority to speak for Islam, the government has increasingly attempted to control their authority since the mid-19th century.

"The ulama want to be independent of the state," Brinton said, adding that the election of Muhammed Morsi, a Muslim Brotherhood representative, as Egypt's president, raises new questions about what will happen to the religious scholars.

El-Sharawi exercised a rare independence in 1995 when he publicly warned Mubarak of God's will regarding tyranny, Brinton said. He made the speech in a gathering of both Muslim and Christian scholars to extend blessings to Mubarak for surviving an assassination attempt in Ethiopia.

"Most men probably would have been imprisoned or killed for that speech, but el-Sharawi was much too popular to be silenced."

During three research trips to Egypt between 2005 and 2008, Brinton was surprised to find that el-Sharawi's sermons continued to be televised and that despite Islamic tradition prohibiting reproductions of the human image, his photo and airbrushed portraits were displayed in many shops and offices.

"When I asked people why they hung his picture on their walls many told me that the visual image of Sharawi brings them blessings," Brinton said.

While she is not sure that el-Sharawi would have accepted his image being displayed to receive blessings, Brinton noted that he did accept watching TV for the right purposes – even though the technology reproduced human images. Today other Muslim scholars advise that neither photography nor television is the same as a human hand drawing the human form, regarded as imitating God's act of creation.

His teachings were not without controversy, yet el-Sharawi's 20 volumes of sermons have remained best-sellers in Arabic and are being translated into English.

"Whenever I spoke with people about Islamic reform they inevitably directed me to Sha'rawi's sermons," Brinton said. "Some Egyptian intellectuals even recounted to me how Sha'rawi had inspired them to return to Islam when they became disillusioned with Western political systems such as socialism and communism.

"It quickly became clear to me that Sha'rawi's influence permeated Egyptian society as much as any figure of modern times, whether political or religious."

His impact on Egyptian culture and religious authority has no parallel in U.S. Christian television ministries, Brinton noted.

Brinton is also interim coordinator of Middle East Studies for KU's Center for Global and International Studies. Her book is scheduled for publication in 2013 and will be titled: "Preaching Islamic Renewal: Religious Scholars and Authority in Modern Egypt."