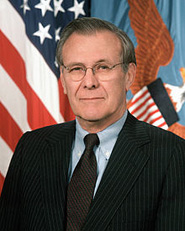 LAWRENCE — Donald Rumsfeld, two-time secretary of defense, will speak at the Dole Institute of Politics at the University of Kansas this month. Rumsfeld will be featured in a Dole Forum event scheduled at 4 p.m. July 26. This event is free, open to the public and contains a book sale and signing.

"Few people have had the opportunity to work as a cabinet member under three different White House administrations," said Bill Lacy, director of the Dole Institute. "We look forward to hearing first-hand accounts of the secretary's extensive career during some of the most pivotal moments in U.S. history."

Rumsfeld may be best-known for his time as secretary of defense under President George W. Bush during and after the attacks by al-Qaida on the United States on Sept. 11, 2001. Within hours of the first hijacking and subsequent plane crashes into the World Trade Center towers, the Pentagon and a Pennsylvania field, Rumsfeld raised the U.S. defense system and offensive readiness to DEFCON 3, which was the highest it had been since 1973. Launching a "War on Terror," President Bush and Rumsfeld went about the task of finding those behind the 9/11 terror attacks. This search grew into compounded, full-scale wars in both Iraq and Afghanistan. Rumsfeld resigned from this position in 2006. Since that time, he has written a memoir, established an educational foundation and served as a distinguished fellow at the Hoover Institution at Stanford University.

Rumsfeld was born in Evanston, Ill., and grew up in nearby Winnetka. He was highly involved in the Boy Scouts of America and sports. He attended Princeton University on academic and Naval ROTC partial scholarships, where he was a member of the football and wrestling teams and earned a degree in political science. After serving three years in the Navy, Rumsfeld ran for, and won, a congressional seat in the 13th District of Illinois. During his time in Congress, he was a lead proponent of the Freedom of Information Act. He was a cabinet member for president Nixon, Ford and George W. Bush. Between his appointments with Ford and Bush, Rumsfeld ran three major science and pharmaceutical companies. Rumsfeld and his wife of 58 years have three children and six grandchildren.

The key to preserving the essence of historic landscapes and their architecture is to permit more change, says a… https://t.co/uIFhLYOG5q
«»
Follow us on Twitter »
Why KU
Apply »
One of 34 U.S. public institutions in the prestigious Association of American Universities
44 nationally ranked graduate programs.
—U.S. News & World Report
Top 50 nationwide for size of library collection.
—ALA
5th nationwide for service to veterans —"Best for Vets: Colleges," Military Times