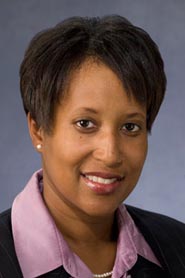 LAWRENCE — Mass magazines are one of the best ways to get health information to women, yet they remain a largely untapped medium for communicating health news and information to African-American women in particular. A University of Kansas professor has published a study showing that articles about health issues that largely affect African-American women are underreported in such magazines, especially those that contain a spiritual or religious element.

Crystal Lumpkins, assistant professor of journalism at KU, authored "Spreading the Gospel of Good Health: Assessing Mass Women's Magazines as Communication Vehicles to Combat Health Disparities among African-Americans." The study took a sample of four popular women's magazines: Ms., Redbook, Good Housekeeping and Essence. Lumpkins and her co-researchers analyzed a six-month sample of each magazine. Even though research has shown the magazines are an effective way of reporting health news, there was scant coverage of health issues that affect African-American women.

"Diabetes, heart disease, HIV/AIDS, all of these major health issues in the African-American community were not addressed," Lumpkins said.

All of the magazines contained stories about food, diet and exercise, but they did not follow up in reporting more detailed or related health news.

"The health stories that were most reported were on reproductive and sexual health," Lumpkins said. "If you're reporting that, then HIV/AIDS falls into that category as well. Seventy-five percent of African-American women are overweight. If that leads to several other health issues, those need to be reported as well."

In the past several years, health communications scholars have considered the effect spirituality and religion have on communicating health information reported in the media, given the high rates of faith among the general and minority population in the United States. Essence, the only magazine among the four specifically targeted to an African-American audience, was the only one shown to use spiritual imagery and language in its health articles. It was also the only magazine in the sample to contain news on HIV/AIDS, even though it was very little.

Lumpkins' research examines how spirituality and religious factors influence individuals' health behavior. She also examines how religious imagery and language affects individuals' likelihood to take part in preventive health care, such as getting screenings. One of her previous studies showed that African-American women shown advertisements about breast cancer awareness preferred those with a religious component over those without.

The findings of her latest study suggest a largely untapped method for health communicators to reach minority populations with their message, Lumpkins said. Individuals tasked with getting news about health issues out to the public could potentially do well to target women's magazines in combination with social media as a means to achieve that goal. Those dealing with health issues that tend to afflict minority populations especially have an opportunity.

It is poignant to reach minority populations, African-American women especially, due to the high incidence of certain health problems in the community. For example, African-American women account for more than 50 percent of all cases of HIV/AIDS in the United States, and the rates of new cases are 15 times higher than those of white women.

"I hope people understand magazines are an important vehicle for health communication, not just to African-American women, but women in general," Lumpkins said. "Yes, they're traditional, but they've proven to be effective. I think health communicators should truly consider them as a way to reach these important populations."