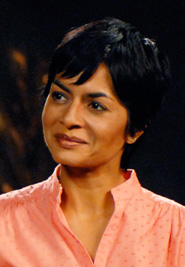 LAWRENCE — America’s fighting men and women provide a sterling example of how to become sustainable, reduce energy consumption and save lives — all without pitting ideological sides against one another, according to research by a University of Kansas professor.

Simran Sethi, associate professor of journalism, has conducted research into the Department of Defense’s efforts to improve sustainability and the psychological barriers of engaging multiple communities in a climate change discussion.

“The military has remained very apolitical. It’s an incredibly useful model of sustainability they’re putting together,” Sethi said. “It changes the whole perspective of what it means to engage in sustainability.”

The Department of Defense is the nation’s largest employer and consumer of energy and one of the top 50 greenhouse gas emitters in the world, Sethi points out in her research. Yet they are working to reduce consumption, not to “go green” or win political points, but to keep soldiers alive.

The military uses large amounts of energy because its mission requires it. Getting fuel to soldiers in remote areas is costly — $13.5 billion was spent by the DOD on energy worldwide in 2011 — and very dangerous. Department of Defense statistics show that between 2003 and 2007, 3,000 U.S. Army personnel or contractors were killed or wounded in attacks on water and fuel convoys.

To combat the high casualty rates, they’ve increased sustainability by installing solar panels on both permanent and temporary bases, using fuel cell chargers to power individual soldier equipment and using biofuels in military vehicles. By improving safety and military effectiveness, they’ve engaged in “secondary sustainability,” or an instance when sustainability is the byproduct, not the primary goal.

Sethi says the Department of Defense has provided a model of how an issue as divisive as climate change can be agreed upon by parties with widely differing views. In this case, by improving sustainability they’ve reduced casualties among soldiers, something that naturally has no opposition. When speaking financially, people refer to a return on investment. In this case, the social return on investment is the key.

“To me, there is no more important social return on investment than lives saved,” Sethi said. “It is a goal shared by all of us, regardless of political affiliation.”

Her research also explores why an issue such as climate change can result in schisms. A 2011 Pew Research Center Poll showed 38 percent of Americans thought global warming was a very serious problem, while 33 percent believed it was not a serious problem or not a problem at all. Psychological research has shown that people can care about only a certain number of issues at a time and that individuals cannot be made to care about an issue by being force-fed scientific data or arguments. Furthermore, the human brain has not evolved past the point of naturally being concerned with immediate problems first.

“We’re still using the same minds we were 200,000 years ago. This understanding renders scientific arguments necessary, but incomplete,” Sethi wrote.

Despite that understanding, mass media and climate change communicators have focused on using tactics such as urging people to “go green” to fight climate change. And the message is framed with images of a polar bear on an ice floe or with a political figure such as Al Gore, it is met with indifference, opposition or near hostility. If society at large is able to find a common theme as either the result or byproduct of increased sustainability, true progress could be made on fighting climate change, Sethi said.

“It is imperative that we redefine our return on investment and frame sustainability and climate change within existing cares. This requires a deeper understanding of values, and a deeper sensitivity to culture,” Sethi said. “If we’re able to achieve that sense of shared purpose, we can achieve something extraordinary.”