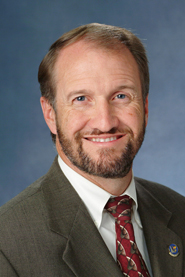 LAWRENCE – Stuart Bell, dean of the University of Kansas School of Engineering since 2002, today was named the next executive vice chancellor and provost at Louisiana State University.

“I want to congratulate Stuart on his selection and thank him for the progress the School of Engineering made under his leadership. Enrollment is expanding to meet the needs of Kansas businesses, and research productivity continues to grow. This is a solid legacy that KU will build on,” said Chancellor Bernadette Gray-Little.

“Stuart’s leadership in guiding the school’s Building on Excellence initiative is a model for enhancing education and research. It helped garner strong corporate and state support for unprecedented growth in the school — in terms of facilities, student body and scholarly excellence. Stuart is leaving us with a solid foundation as we work to realize the university vision laid out in Bold Aspirations,” said Provost and Executive Vice Chancellor Jeffrey Vitter.

Vitter will consult with engineering faculty, staff and students prior to naming an interim dean. A national search will be conducted to fill the position on a permanent basis.

“I’ve had an amazing opportunity to work with some brilliant, hard-working colleagues during the past 10 years,” Bell said. “Even though I’m looking forward to new challenges at LSU, I know I’m leaving a wonderful institution with faculty, staff, students and alumni who are nothing short of inspiring.”

Bell will remain at KU through July and begin his duties at LSU on Aug. 2. Louisiana State University, located in Baton Rouge, La., is the state’s flagship institution and enrolls more than 26,000 students. It is one of only 21 institutions nationwide designated as a land-grant, sea-grant and space-grant institution.

The KU School of Engineering has undergone dramatic change during Bell’s tenure, including the opening of Eaton Hall in 2003 and the construction of the M2SEC research building that will be occupied later this year. Four major engineering-focused research centers were created, including the National Science Foundation-funded Center for Remote Sensing of Ice Sheets and the Center for Environmentally Beneficial Catalysis. Undergraduate enrollment in engineering and computing is at a 29-year high. Doctoral student enrollment and annual research awards to faculty have nearly doubled.

Since arriving at KU, Bell has helped attract major gifts to the school. Among the many contributions to KU Endowment to benefit the school are gifts of $20 million from alumnus Madison “Al” and Lila Self. Their donations created and then expanded the Self Engineering Leadership Fellows Program, which provides a leadership and enrichment program for goal-oriented School of Engineering students interested in business, industry and entrepreneurship. In 2011, the school realized a $32 million estate gift from the late Charles and Mary Jane Spahr.

Dean Bell also was instrumental in the 2011 effort to win broad legislative support to expand engineering education in Kansas, thereby providing the state’s industrial sector with the additional talented engineering graduates they need to expand operations and grow the economy.

Over the next three months he will remain active in the school’s administration, helping finalize faculty searches under way and fostering the planning process for the Phase II construction project on the Engineering Complex that will add more than 100,000 square feet of classroom, laboratory and work space to handle the school’s burgeoning enrollment.