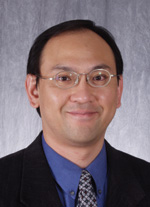 LAWRENCE — Every day media reports feature people from the left and right sides of the political aisle hurling insults at each other for their differences in opinion, and drawing conclusions about others, all based on their political beliefs. The lines between conservatives and liberals are well-drawn in terms of ideology, but a University of Kansas professor has authored a study about how they differ in everyday life.

Tien-Tsung Lee, associate professor of journalism, has written a study examining the psychographic differences between people who self-identify as liberal or conservative, in terms of how trusting they are of others, how cynical, social, orderly or strict they are, along with a number of other traits. He will present the research in May at the International Communication Association Convention.

“I’ve been wondering about this for years,” Lee said of differences between people of different political ideologies. “I know quite a few people from both sides and have always thought they have a lot of things in common, but some differences as well. Traditionally when people talk about liberals and conservatives they talk about political and social differences. I’m asking questions about how they differ psychographically. I want to find out how they differ in normal, everyday life.”

Lee analyzed survey data from a study of more than 7,000 American adults. The survey asked people to self-report their ideology on a scale from very conservative to very liberal and measured psychographic traits such as aggression, curiosity, fear, happiness, the need to be in charge, being indecisive, nurturing, order or being organized, religiosity, saving, self-confidence, social life and trust. Participants were also given a list of adjectives — from open-minded, stylish, cynical to exciting — to describe their personalities and asked about their media consumption habits.

Some of the findings were surprising, Lee said, while others confirmed hypotheses. For example, the data showed neither liberals nor conservatives to be happier than the other, but that liberals were slightly less optimistic. They were also shown to be more cynical, but have a more active social life.

“Liberal ideologies are positively correlated with being more aggressive, curious, wanting to be in charge, more social, more trusting of others and more interested in new places, culture, food and music,” Lee wrote. “Being liberal also means being less religious and less likely to be frugal (according to the data).”

Not surprisingly, people who identified as conservative were more likely to be religious. However, the hypothesis that conservatives are more strict was not supported by the survey data, neither was the idea that they would be less nurturing than liberal individuals.

In terms of media consumption, liberals were more likely to feel the need to get news every day and to read print magazines, but there was no difference in terms of television, radio or newspaper usage. In the realm of new media, liberals showed they are more likely to seek entertainment such as movies, music or social networks online, but there was no discernible difference in how either group consumes other online media or performs activism.

Lee is quick to point out that the study and its findings do not justify claiming one side is right or better than the other, but that the value lies in helping people to better understand each other. Advertisers looking to reach people of a certain ideology can view the findings to learn more about media habits of both groups. The information can also be of value to political strategists, researchers and people of all political viewpoints.

Researchers at @KUSpecialEd found that although pivotal response treatment can be effective in improving certain sk… https://t.co/Z5lCafdNp1
«»
Follow us on Twitter »
Why KU
Apply »
One of 34 U.S. public institutions in the prestigious Association of American Universities
44 nationally ranked graduate programs.
—U.S. News & World Report
Top 50 nationwide for size of library collection.
—ALA
5th nationwide for service to veterans —"Best for Vets: Colleges," Military Times