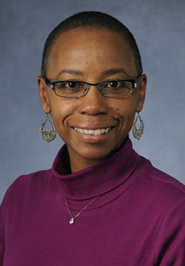 LAWRENCE — A recent study of East St. Louis — the once-thriving industrial suburb that has become the nation’s poster city for suburban decay — is recasting classic notions of American suburbs, according to a University of Kansas researcher.

“The face of American poverty is changing. It is increasingly suburban and minority,” says Jennifer Hamer, KU professor of American studies and author of “Abandoned in the Heartland: Work, Family, and Living in East St. Louis.”

“These are hard times, and the struggle for American working-class men and women to maintain dignity, work and family life is a national one,” Hamer writes. “Nowhere is this struggle sharper than in America's heartland and especially in East St. Louis, Illinois.”

Hamer describes East St. Louis as “a bellwether for how working families, outside of central city cores across the Midwest, Northeast and nation, are stitching together a makeshift safety net to meet the needs of children and elderly as once-thriving municipalities crumble from deficits, layoffs and devastated infrastructures.”

Once known as “the Pittsburgh of the West,” East St. Louis is “a city that has simply been allowed to die,” Hamer explains. “It is an example of how economic disinvestment sours a community and the lives within it. The ‘ideal’ of American suburbia — mobility, homeownership, safety and amenities — is dying as well.”

Hamer conducted her study while teaching at the University of Illinois. As a sociologist focused on African-American families, Hamer selected East St. Louis as a heartland suburb that had been abandoned by corporate and manufacturing leaders. Consequently the city had lost its tax base and its middle-class core, and its demographics gradually shifted to a predominantly low-income African-American population.

Quoting a study of U.S. poverty rates by the Brookings Institution, Hamer notes that the suburban poor outnumber their city counterparts by at least 1 million.

“African-Americans once disproportionately located in the ghetto communities of the inner cities are increasingly living in suburban spaces. Approximately 40 percent reside in the suburbs of America’s metropolitan areas but, among these, almost 20 percent are below poverty,” Hamer says.

Today most East St. Louisans rent rather than own their homes. Amenities such as bowling alleys, shopping malls and movie theaters are gone. Approximately half the teenagers graduate from high school — only about half of those graduates find jobs.

Like similar suburbs abandoned by corporate and manufacturing leaders, East St. Louis no longer has revenues to support sufficient police and fire protection; the razing of abandoned properties; stoplight and pothole maintenance; and a good educational system.

“More significantly, families suffer immensely from abandonment,” Hamer emphasizes. “Senior women … remain in the workforce well beyond retirement to support the care of their grandchildren, adult children and disabled kin. Many of these women suffer from diabetes, hypertension and cancers, yet place their own health care needs second to that of others. Working men and women move from one job to the next in search of better hours, safer working conditions, employment closer to home and slightly higher wages.”

Hamer also found that East St. Louis families value education, tend to want a better life for their children, care for their elders and demonstrate a strong work ethic.

“For many, the 40-hour minimum wage workweek is balanced with off-the-books hustles like lawn and child care, delivering home-cooked meals to shut-ins or hairstyling. Fathers protect homes and families by stepping in where the city cannot. They clean up the streets from menacing stray dogs, hazardous abandoned properties and the criminal element that a troubled police force cannot seem to manage,” Hamer says.

“Like many across the U.S., working-age people are experiencing downward mobility – falling further and further from any semblance of the American suburban promise.”

Hamer is preparing to expand her research of black families to those of low-income white and Hispanic families. In addition, she is working on developing an oral history of working-class people. She is also author of “What it Means to be Daddy: Fatherhood for Black Men Living Away from Their Children” and is editor of the journal Black Women, Gender and Families.

Search options »
Subscribe to KU Today
Researchers at @KUSpecialEd found that although pivotal response treatment can be effective in improving certain sk… https://t.co/Z5lCafdNp1
«»
Follow us on Twitter »
Why KU
Apply »
One of 34 U.S. public institutions in the prestigious Association of American Universities
44 nationally ranked graduate programs.
—U.S. News & World Report
Top 50 nationwide for size of library collection.
—ALA
5th nationwide for service to veterans —"Best for Vets: Colleges," Military Times