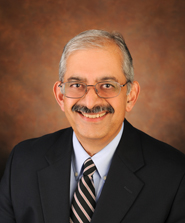 LAWRENCE – A seasoned professional with successful experience in private business, state government and higher education will join the University of Kansas Feb. 1 as the new director of its bicampus Center for Technology Commercialization (KUCTC). It is a key hire for KU as it seeks to translate more faculty research into marketplace solutions and drive economic development in Kansas.

Rajiv Kulkarni comes to KU from the University of Utah, where he is currently director of Business and Technology Development in the Technology Commercialization Office. Previously, he was associate director in that office, responsible for its physical sciences section. During his 10 years at the university, he negotiated and completed more than 100 licensing agreements, 28 of which resulted in new startup companies based on university research.

“I have a passion for the commercialization of technology,” said Kulkarni, whose background includes a doctorate in microbiology from the University of Nebraska-Lincoln. “I love to see inventions that originate with university research become products that help people and foster further research. KU has excellent opportunities to do that in such areas as drug discovery and delivery, biorefining, engineering, information technology, education and medicine.”

Kulkarni will report to Julie Goonewardene, associate vice chancellor for innovation and entrepreneurship in the Office of Research and Graduate Studies. He succeeds Jim Baxendale, who plans to transition to a part-time role at KU later this year.

“KU is positioning itself to become one of the Midwest’s leading technology commercialization centers,” Goonewardene said. “KU’s senior leadership supports this cause and is making the needed investment. This is also a high priority for state government and the people of Kansas. KU is responding by making economic development a bigger part of our overall mission.”

The University of Utah is one of the nation’s premier research universities when it comes to creating startup companies based on university technology. It launched 19 new companies in 2009 and an additional 18 in 2010, surpassing such larger universities as the Massachusetts Institute of Technology, California Institute of Technology and Kentucky, Columbia and Colorado. The university has also led efforts to bring venture capital into the state to fuel investment in these companies. In 2010, and again in 2011, Forbes magazine ranked Utah as the best U.S. state in which to do business.

“The role of KUCTC is to maximize the commercialization of university inventions and provide value to our stakeholders,” said Kulkarni. “That’s my vision. To do that, we will tap into the expertise of the faculty, earn their trust and provide strong customer service to researchers, companies and investors.”

Kulkarni’s first job out of college was as a senior research scientist for six years with Native Plants Inc., a startup plant biotechnology company in Salt Lake City. He later worked for Cytozyme Laboratories in Salt Lake City as vice president of technical services and market development. From 1995 to 2001, Kulkarni was assistant director and then director of the Office of Technology Development for the state of Utah. In that role he managed the Utah Centers of Excellence Program, a $2 million-plus, state-funded grant program aimed at supporting the commercialization of university technologies. He became senior technology licensing manager at the University of Utah in 2001 and associate director in 2008, prior to assuming his current position in 2011.

In addition to his doctorate from Nebraska, Kulkarni’s academic background includes bachelor’s and master’s degrees from Eastern Michigan University, a postdoctoral fellowship at the University of California-Riverside and an MBA from the University of Phoenix.

Make new friends, writes @SusanBlackSteen , but know that #KUdiscoveries from @KUCommStudies found that it will take… https://t.co/MLimzAZSIV
«»
Follow us on Twitter »
Why KU
Apply »
One of 34 U.S. public institutions in the prestigious Association of American Universities
44 nationally ranked graduate programs.
—U.S. News & World Report
Top 50 nationwide for size of library collection.
—ALA
5th nationwide for service to veterans —"Best for Vets: Colleges," Military Times