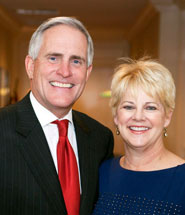 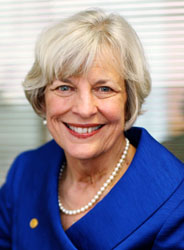 LAWRENCE — Three people associated with the University of Kansas have received prestigious awards through District VI of the Council for Advancement and Support of Education (CASE).

Kurt and Sue Watson, of Andover, received the Volunteers of the Year Award, and Judy Wright, of Lawrence, received the Virginia Carter Smith Recognition Award. The awards were presented Jan. 9 at the CASE District VI conference in Denver.

The Watsons are serving as chairs of KU’s comprehensive campaign, Far Above: The Campaign for Kansas, which is scheduled to kick off April 28. Kurt is president and chief operating officer of IMA Financial Group in Wichita. He is past chair of the KU Endowment Board of Trustees and a current member of its executive committee. He earned a bachelor’s degree in education from KU. Sue earned a bachelor’s degree in education from KU. She is past chair and a former member of the executive committee of the Board of Directors of the KU Alumni Association.

“Sue and I are very fortunate to have the opportunity to serve the University of Kansas,” said Kurt Watson. “We could not be more honored to receive this recognition from CASE, knowing how many deserving volunteers there are in CASE Region VI.”

Judy Wright retired from KU Endowment on Dec. 22, where she served as assistant vice president and director of the Chancellors Club. Throughout her 17-year career at KU Endowment, she was active in CASE leadership. She chaired the District VI conference in 2008, served on the District VI Board of Directors for six years and chaired the district’s recognition service awards committee. In addition, she co-chaired the district’s philanthropy track, was a moderator during conferences and served as a presenter three times. She earned a bachelor’s and master’s degrees from Baylor University in theatre and speech, and a Ph.D. in communication studies from KU.

“My work as conference chair and on the CASE board has been so rewarding and meaningful,” said Wright. “I’m humbled, tickled and thrilled to receive the Virginia Carter Smith Recognition Award.”

Dale Seuferling, president of KU Endowment, said he was thrilled that Kurt and Sue Watson and Judy Wright were being honored by CASE. “It’s rare for both of these awards to go to people associated with one university,” said Seuferling. “It’s well-deserved. I know I speak for many at KU and KU Endowment when I say we appreciate and respect the dedication that the Watsons and Judy have shown through their volunteerism and careers in support of the University of Kansas.”

The Virginia Carter Smith recognition award is presented to senior advancement professionals with exceptional service to CASE who have ended or will end their careers within the last or next 12 months. The award is presented at the conference nearest the recipient’s retirement date.

The Council for Advancement and Support of Education is a professional association serving educational institutions and the advancement professionals who work on their behalf in alumni relations, communications, development, marketing and allied areas. District VI serves the Mid-America region, including Kansas, Colorado, Iowa, Missouri, Nebraska, North Dakota, South Dakota and Wyoming.