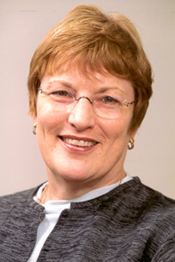 LAWRENCE — Children exposed to HIV before birth are at risk for language impairments, according to a study by researchers at the University of Kansas, the National Institutes of Health and other institutions.

Moreover, those children may benefit from routine screening for language impairment, even if they don’t have any obvious signs of a language problem, the researchers said.

The researchers found that 35 percent of a group of school-age children born to women with an HIV infection during pregnancy have difficulty understanding spoken words and expressing themselves verbally. On a standard series of tests of language ability, children exposed to HIV before birth scored, on average, within the lowest 21 percent of all children who have taken the test.

Children exposed to HIV before birth tended to have language delays, regardless of whether they later became infected with HIV.

Mabel Rice, the Fred and Virginia Merrill Distinguished Professor of Advanced Studies at KU, was the lead investigator in the Pediatric HIV/AIDS Cohort Study, which was supported by eight NIH institutes. The findings appear in the Journal of Development and Behavioral Pediatrics.

“Our results show that children exposed to HIV have more than twice the chance of having a language impairment than do children in the general population,” said Rice, an international authority on language disorders in children and the genetics of language acquisition.

The study could not determine whether the high rates of language impairment in the HIV-exposed children can be attributed to HIV exposure or to other unidentified factors.

The 468 children in the study were 7 to 16 years old. A total of 306 were HIV-infected, while the remaining 162 were exposed to HIV during pregnancy but did not become HIV-infected. In addition to evaluating the children’s language ability, the researchers analyzed their medical records, tested their hearing and evaluated their general cognitive development.

Among HIV-positive students, those with a severe or poorly controlled HIV infection were about three times more likely than students with HIV who responded to treatment to experience language delays associated with cognitive impairments or hearing loss.

“We encourage those caring for children exposed to HIV in the womb to provide early treatment for language impairments,” Rice said. “Children who don’t use language well not only are at risk for school failure, but may have difficulty communicating with their peers and establishing friendships. Signs of potential language impairment include difficulty following instructions, appearing distracted or uninterested, difficulty understanding puns and plays on words, and difficulty with rhyming.”

NIH, the nation's medical research agency, includes 27 institutes and centers and is a component of the U.S. Department of Health and Human Services. NIH is the primary federal agency conducting and supporting basic, clinical and translational medical research, and is investigating the causes, treatments, and cures for both common and rare diseases. For more information about NIH and its programs, visit here.

For details on Rice, visit here.

Search options »
Subscribe to KU Today
Preserving historic landscapes and the buildings within them is not about conservation at all costs, says an… https://t.co/UB3aqnEhz8
«»
Follow us on Twitter »
Why KU
Apply »
One of 34 U.S. public institutions in the prestigious Association of American Universities
44 nationally ranked graduate programs.
—U.S. News & World Report
Top 50 nationwide for size of library collection.
—ALA
5th nationwide for service to veterans —"Best for Vets: Colleges," Military Times