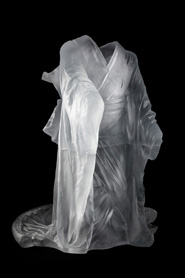 LAWRENCE – When Hope Talbot of Overland Park saw a series of unique life-size glass sculptures by Karen LaMonte featuring absent figures of women in kimonos, she had two reactions.

Second, she wanted others to be able see up close the stunning translucent sculptures that took months to create, cast and cure.

Talbot, who has long supported the arts, turned to the Spencer Museum of Art at the University of Kansas, where her younger daughter had studied art.

LaMonte, a U.S. citizen who lives and works in the Czech Republic, has access to a kiln that can heat glass to nearly 2,000 degrees Fahrenheit. Afterward her sculptures remain in the kiln for three months to rest and stabilize.

This past May the Spencer museum staff unpacked “Chado,” a 500-pound hollow sculpture of a kneeling geisha serving tea. Once in place at the entrance of the 20/21 Gallery, they arranged the lighting to flow through and around the sculpture. LaMonte’s use of light and space with her sculptures of the draped human form have earned her international honors.

Gallery visitors note that “Chado”– the Japanese name for tea ceremony — has an ethereal quality. Viewed from a distance, “Chado” appears to float above the base especially constructed to hold its weight. The woman within the hollow sculpture is absent, yet the viewer senses her presence in the light flowing into the empty space and reflected in every fold and crease of the kimono.

“The response to 'Chado' from students and the public has been tremendous,” said Earle, who worked closely with Talbot to acquire the sculpture.“Collaborating with Hope Talbot has been extremely rewarding on all levels. She has a great eye, and it was a pleasure to encourage her role as ‘curator’ in this case. Karen LaMonte’s kimonos had barely landed on U.S. soil when Hope found them.”

Describing “Chado” as an important acquisition, Saralyn Reece Hardy, museum director, said, “We are grateful for Hope Talbot’s support of the Spencer Museum and the acuity of her eye and vision that drew her to Karen LaMonte’s glass kimonos.”

The museum holds special memories for Talbot. In the early 1980s, her daughter, Wendy, had been an art student at KU and introduced her mother to the Spencer. The two shared a love of art and talked of opening a small gallery together someday.

The future did not unfold as the Talbot family could have expected. Wendy died at age 21 in 1985.

Within a year of Wendy’s death, her parents were visiting a gallery in San Francisco when they came across a tapestry that took them by surprise. Hope Talbot remembers getting goosebumps when she first saw a shimmering prismatic tapestry by Lia Cook titled “Through the Curtain #2.” Something in the soft, reflective quality of the rayon fibers that Cook had washed and dyed to create the weaving immediately reminded Hope Talbot of Wendy. Later when her husband, Marshall, first viewed the tapestry, unaware of his wife’s response, he said aloud, “I see Wendy in this.”

The Talbots purchased the tapestry in 1986 as a memorial gift in Wendy’s name for the Spencer collection. Today the tapestry is on exhibit near “Chado.”

Twenty years later, when circumstances permitted, Hope Talbot honored Wendy’s love of art again by establishing a fund with KU Endowment for a Wendy Talbot Memorial Art Scholarship. In the past five years, 12 KU students preparing for careers in the arts have benefited from the memorial gift of financial aid.

“It’s very hard to get into the arts,” she says. “I think my daughter would have approved of the scholarship.”

She attributes her support of the arts to her daughters, Wendy and Tracy. When they entered school, she took them to museums, enrolled them in art classes “to open their world to what’s out there in life” and started a picture lady program in Tomahawk elementary school in Overland Park.

In time, those experiences awakened a desire to build art awareness that today serves generations of students as well as honors a daughter’s memory.

Although a @KUJournalism study about fake health news was conducted before the emergence of COVID-19, the conclusio… https://t.co/001E9xWNJU
«»
Follow us on Twitter »
Why KU
Apply »
One of 34 U.S. public institutions in the prestigious Association of American Universities
44 nationally ranked graduate programs.
—U.S. News & World Report
Top 50 nationwide for size of library collection.
—ALA
5th nationwide for service to veterans —"Best for Vets: Colleges," Military Times