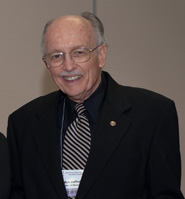 LAWRENCE – A University of Kansas professor of architecture has been named the nation’s top educator in acoustics by the Acoustical Society of America.

Robert C. Coffeen, lecturer and adjunct associate professor at the KU School of Architecture, Design and Planning, has been awarded the 2011 Rossing Prize in Acoustics Education by the Acoustical Society of America, the premier international scientific society in acoustics devoted to the science and technology of sound. The prize is awarded annually to one educator for excellence in the teaching of acoustics.

“I am honored and feel privileged to receive the Rossing Prize,” said Coffeen, who received the award earlier this month at the Acoustical Society of America’s annual meeting in San Diego. “Most of all, I feel honored and privileged to have the opportunity to pass on to my students knowledge that developed as a result of interactions with important mentors, through experiences in professional acoustical consulting, and as a result of continuing study and research and the inspired assistance of my University of Kansas colleagues, as well as through my membership in the Acoustical Society of America and my association with ASA colleagues.”

Coffeen has won numerous teaching awards over the years, including the National Systems Contractors Association Educator/Instructor of the Year in 2006, 2009 and 2010.

Coffeen’s teaching at KU has focused on the acoustics of buildings, including room acoustics, architectural noise control, mechanical and electrical system noise control, and electro-acoustic sound reinforcement and reproduction. He teaches all or portions of 10 courses in the Architecture Department of the School of Architecture, Design and Planning and one course in the Architectural Engineering program within the Civil Engineering Department of the School of Engineering relating to building acoustics and electro-acoustics. His current research interests include roof rain noise, computer modeling and auralization, and effective methods for teaching building acoustics to architecture students.

“We consider Professor Coffeen a treasure within our school,” said John Gaunt, dean of the School of Architecture, Design and Planning. “Acoustics comes alive when Bob speaks, enabling students to really connect science and art in the pursuit of responsive, magical buildings. Having him here makes our school a greater place. He often tells his students that ‘there’s more to sound than what you hear,’ and thanks to his passion and gift for teaching, his students understand that.”

Coffeen’s previous contributions and positions in the field include radio engineering officer with the U.S. Army; principal engineer with Burns & McDonnell Engineering Co. in Kansas City, Mo.; founder and principal consultant for Coffeen Fricke & Associates, consultants in acoustics and audio/visual communication, in Lenexa, and principal of R.C. Coffeen, consultant in acoustics, Leawood.

Coffeen said he is especially proud of KU students’ participation in the annual ASA student design competition, which he has helped organize during the past 13 years.

“I encourage students to attend our semiannual national and international meetings and to present papers at these educational meetings,” he said. “Though my teaching and through the assistance of ASA activities, including our University of Kansas student ASA chapter, I have guided a significant number of architecture and architectural engineering students into careers in professional acoustical consulting, professional sound system contracting and acoustics education at the university level.”

The Acoustical Society of America is the premier international scientific society in acoustics devoted to the science and technology of sound. Its 7,000 members worldwide represent a broad spectrum of the study of acoustics. ASA publications include The Journal of the Acoustical Society of America (the world's leading journal on acoustics), Acoustics Today magazine, books and standards on acoustics. The society also holds two major scientific meetings each year. For details, visit here.

Search options »
Subscribe to KU Today
Although a @KUJournalism study about fake health news was conducted before the emergence of COVID-19, the conclusio… https://t.co/001E9xWNJU
«»
Follow us on Twitter »
Why KU
Apply »
One of 34 U.S. public institutions in the prestigious Association of American Universities
44 nationally ranked graduate programs.
—U.S. News & World Report
Top 50 nationwide for size of library collection.
—ALA
5th nationwide for service to veterans —"Best for Vets: Colleges," Military Times